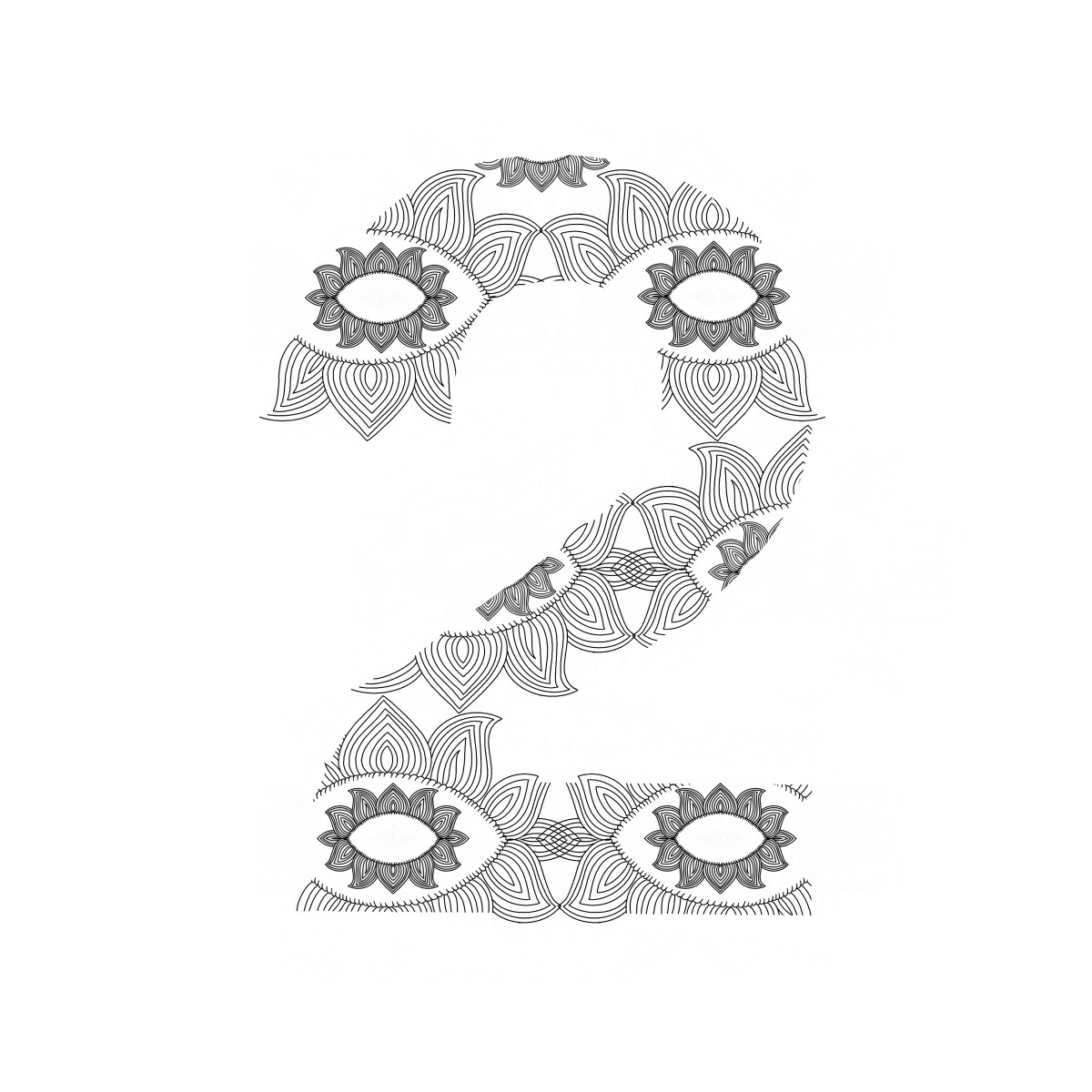 The title of my Typography project is ‘Kalamkari Letter Design’. I have influenced the title of this subject from the original Indian art form named as “Kalamkari Art”. The word Kalamkari is derived from a Persian word where ‘Kalam’ means pen and ‘Kari’ refers to craftsmanship.
The power of imagination makes us infinite. And that is something I wanted to portray through my designed letters. The letter design is a stylized experimental display type. It is designed with a strong influence of Hindu culture and focuses
mainly on religious subjects and scenes from Ramayana and Mahabharata etc.

Selection criteria for the subject:
According to the research, India has always been known as the land that portrayed cultural and traditional vibrancy through its conventional arts and crafts. The main reason behind selection of this topic is to make people aware about India’s rich art style and to make them embrace the beautiful art pieces by taking it forward, by bringing the awareness about it and keeping its legacy.

How is it related to Typography?
The beauty of well-designed type can have a huge impact on how we approach a text. The world of typography today is so much more than a simple game of fonts. Here I have tried to go beyond the technical necessities of typography and tried highlighting it as a true art form. It involves documenting India’s legacy with type. Visual cues from instances of Indian culture are assimilated in letters.
Hence this subject has been chosen by which the people could get aware in the form of visual. To make this subject more impactful & to make the subject more interactive and easy to understand each letters are given meaning.

Work process:
The initial stages of work went mostly consisted of the research work about the script, basic structure, and its anatomy. The purpose of language is to communicate, both verbally as well as visually, with scripts that are symbolic in nature. The fundamental purpose of writing is to convey ideas, but the man was a designer long before he started writing. Then afterward the anatomy of a letter can perhaps be defined as a system which depicts the structural makeup of a letter; describing certain key parts within the letter for a given typeface. These morphological
articulations of the characters within the font forms the first level of description within the typographic ontology of a script.
For this subject, first I collected some textual information on Kalamkari art form of India. Once the information was ready, I had to short list 26 stories as per each letter which would be perfect for the execution part. So, I finalised the following Stories based on Ramayana & Mahabharata:
• A- Krishna showing Vishwarupa to Arjuna during Mahabharata war.
• B- Vishnu reclines on Sheshnaga with Brahma emerging on a lotus from his navel.
• C- Cowherd in Vrindavan.
• D- Durga on lion.
• E- Panchmukhi avatar of Vishnu rescues mother Earth from the clutches of Hiranyaksha.
• F- Krishna enchanting Gopika’s with Flute.
• G- Siddhidata Ganesha surrounded by other Gods.
• H- Rama gives Hanuman his ring to take to lanka for Sita.
• I- Sita requests Rama to fetch the Illusory Golden deer.
• J- Jatayu battels with Ravana to rescue Sita.
• K- Krishna preaching Gita to Arjuna during Kurukshetra war of Mahabharata.
• L- Lakshmi on lotus.
• M- Krishna lifts Mount Govardhana.
• N- Narsimha killing demon Hiranyaksha.
• O- Churning of the Ocean Manthan.
• P- Hanuman with Parvat Sanjeevni.
• Q- Krishna dancing on Kaliya naag after winning Quarrel with it.
• R- Ram Darbar.
• S- Rama worshipping Shiv Linga at Rameswaram.
• T- Rama and Lakshman at war with Ten headed Ravan.
• U- Lord Uma Maheshwari.
• V- Sita in ashok Vatika.
• W- Rama meets Wounded Jatayu.
• X- Dancing Shiva & Parvati on the Xyst of the far east.
• Y- Dashratha received sacred Paayasam from the Yajna Purusha.
• Z- Shravan kumar meets Zinger death.
•All the numberials are designed using the Kalamkari Patterns.
•All the punctuations are designed using the Characters from Ramayana & Mahabharata.
After that, I decided to create stylized letter, designed in a contemporary modern style, so I had to study different ways of execution too. Later, I finalised with line drawing execution which would give me the desired result.

Challenges faced:
To communicate the stories, it was necessary to have a visual hierarchy with appropriate fillers between each humanistic pictorial to make it look engaging. The hours of patience to maintain the balance of intricacy and it’s charm; and after all making the structure look like a family was the challenge.

Learning:
The three important things I’ve learnt is, the dedication and the persistence that are required to produce this work, also the countless hours to design and redesign until balance was reached, and ofcourse lot of patience and planning.

Impact of the work:
India has inherited a pre-Aryan culture which is reflected in the folk art. Folk Paintings are basically concerned with the gramins (villages) of India. They are pictorial expressions of village painters which are marked by the subjects chosen from the
epics like Ramayana and Mahabharata, Bhagvata Purana as well as daily village
life, birds and animals and natural objects like sun, moon, plants and trees.
I think this comeback of art styles in letter design can create a positive impact on the
audience. It reflects the human psychology and shows the reality and innocence in
its purest form. The letter design shows society that everyone needs to embrace this
beautiful art by taking it forward and not limiting it to just to a particular region.

A nation’s culture resides in the hearts and in the soul of its people.
Art is solving problems that cannot be formulated before they have been solved.
The shaping of the question is part of the answer. 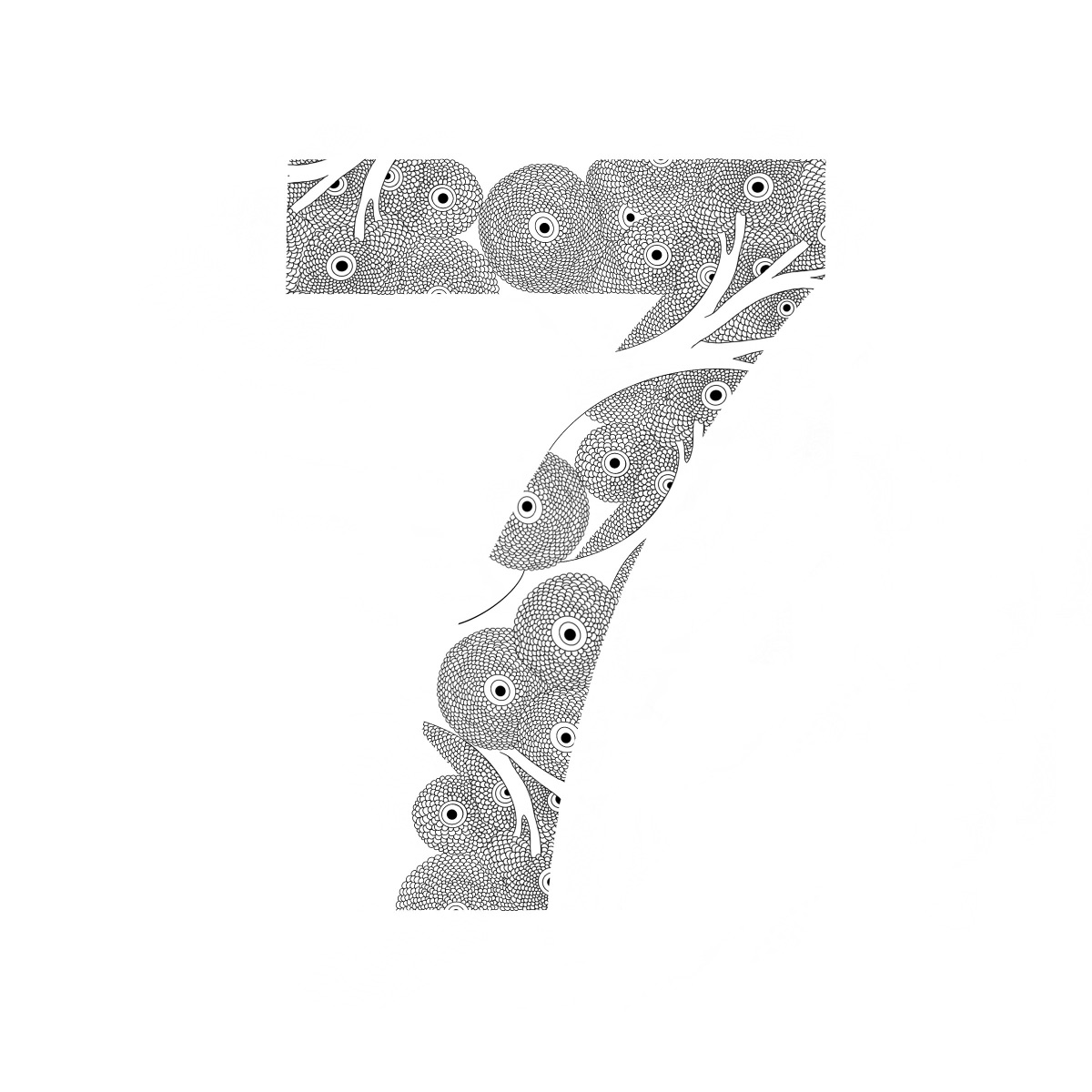 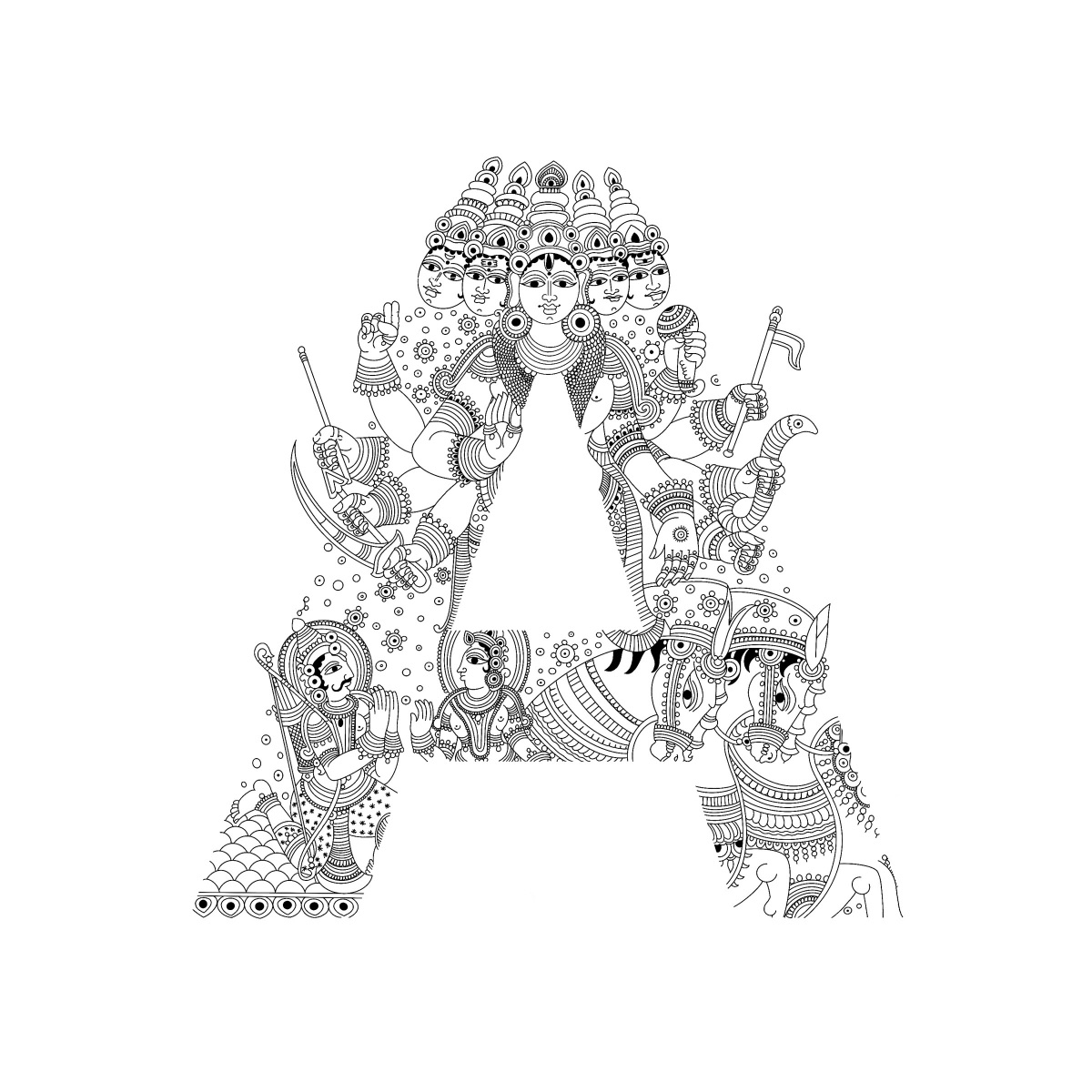 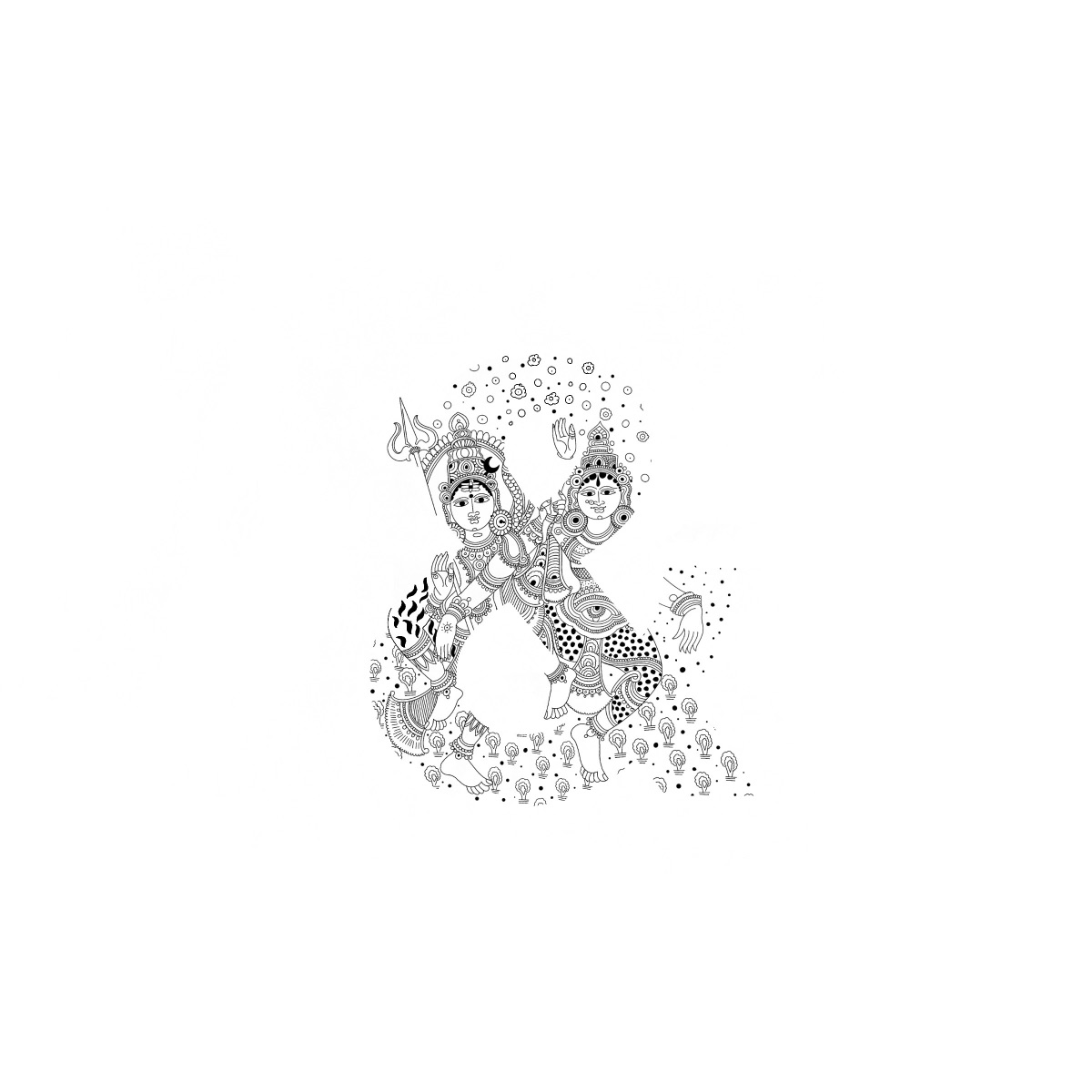 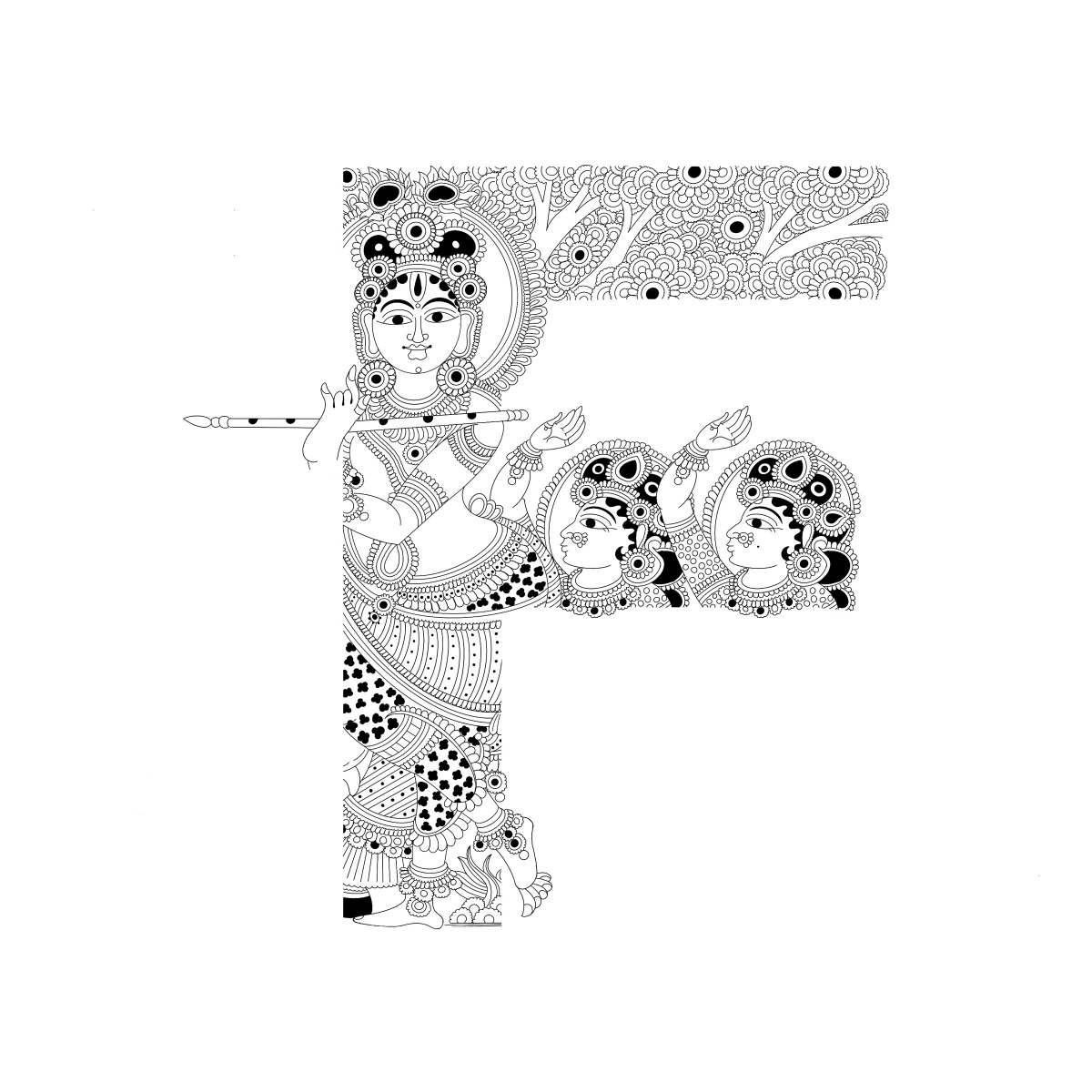 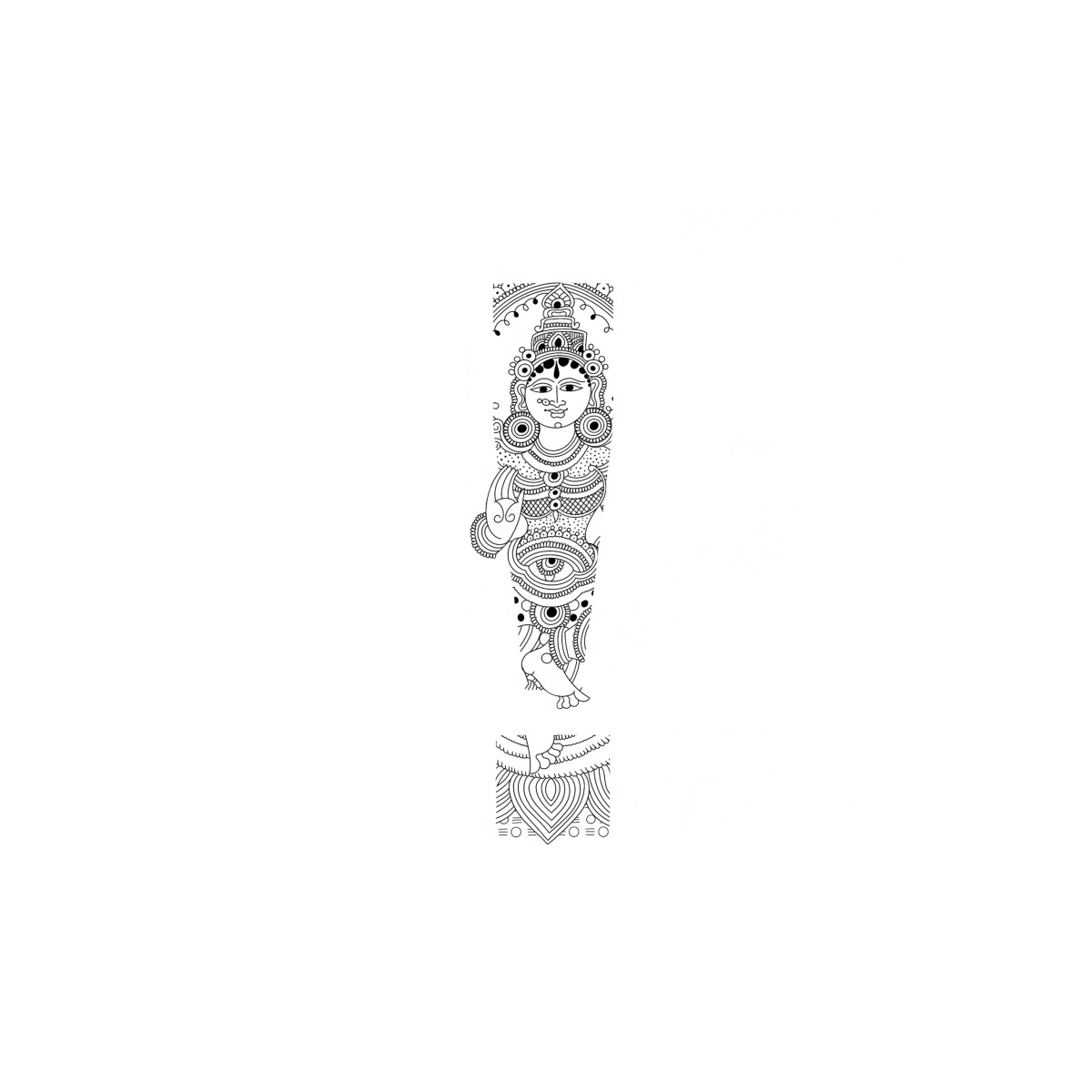 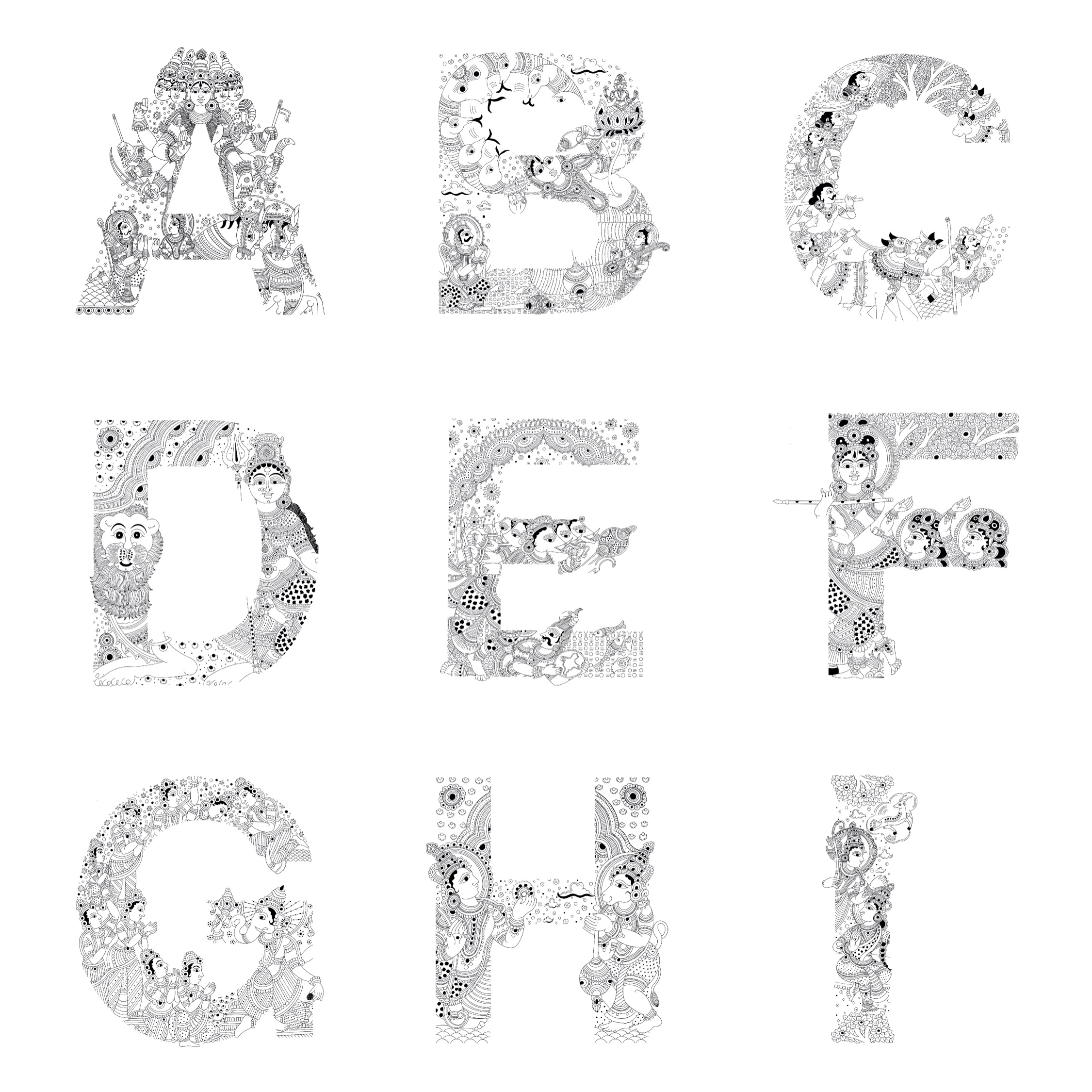 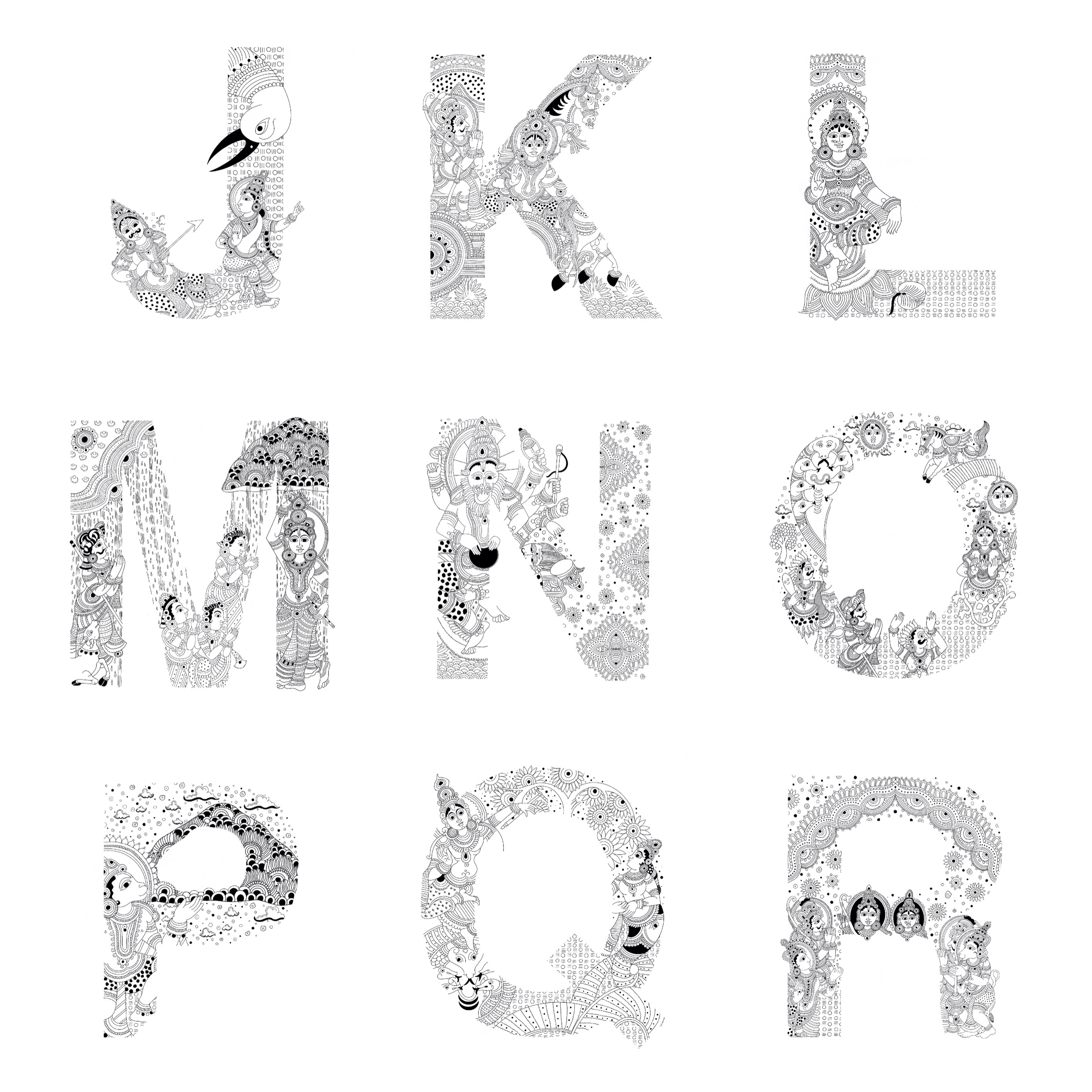 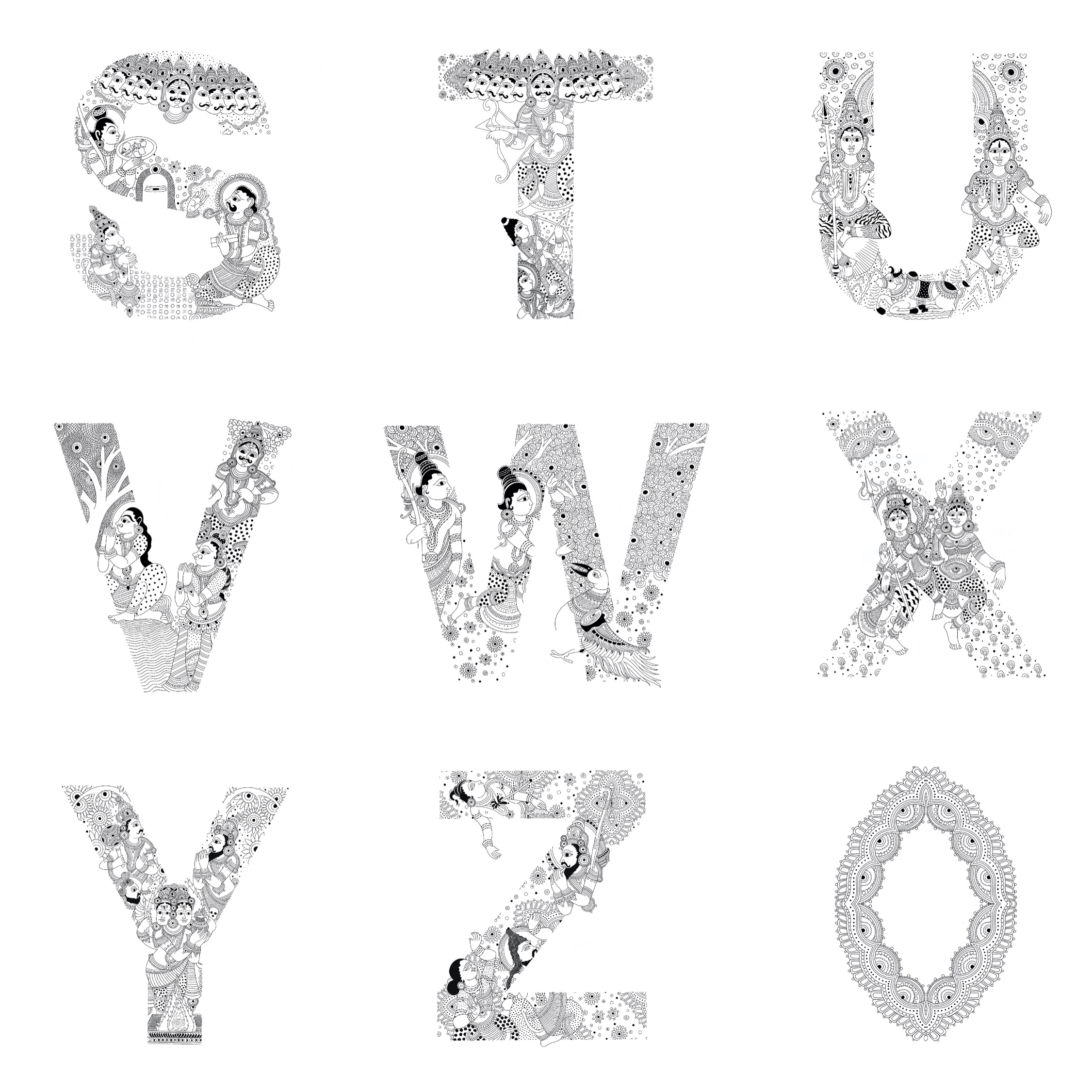 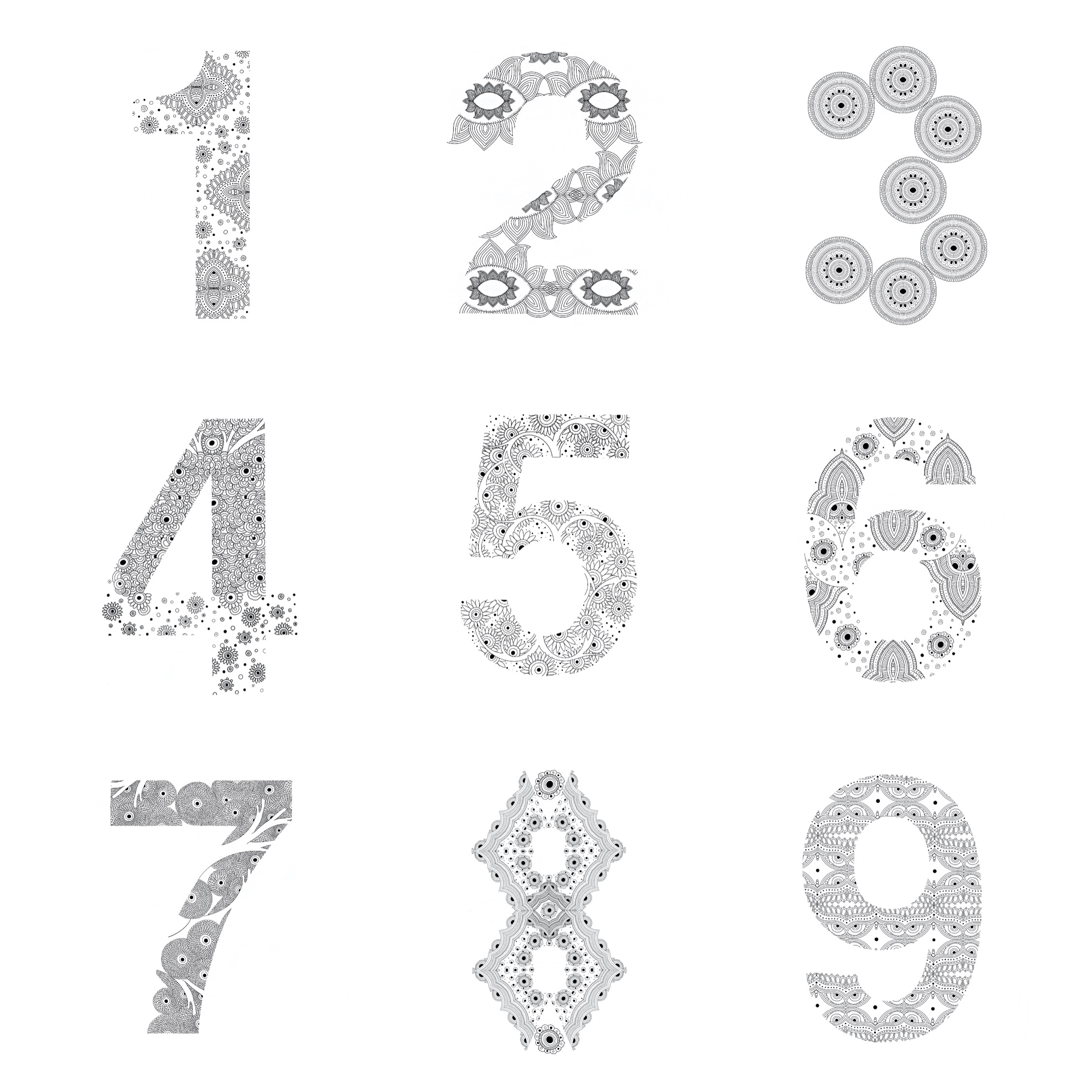