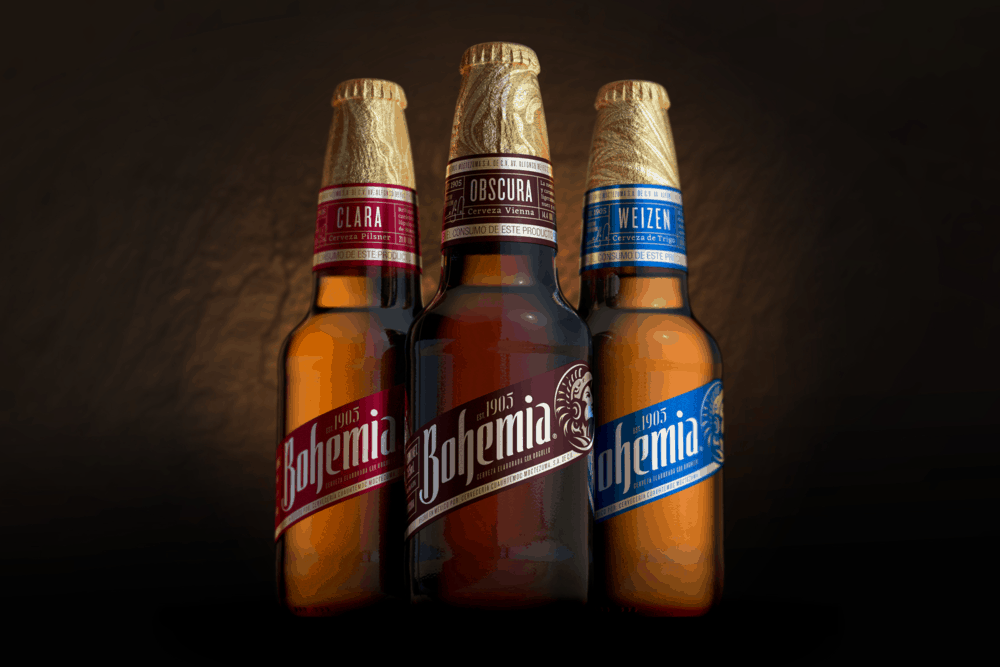 “Global brand design consultancy, Elmwood, has completed its latest project for Heineken with a radical redesign of its oldest premium Mexican beer brand, Bohemia.   The re-brand is the third piece of work delivered by Elmwood in the Mexican market, which continues to put Elmwood on the design stage as a global player.   Being the first premium beer in the country when it launched in 1905, Bohemia is an iconic brand in its native Mexico. Steeped in traditional values and a wealth of heritage, the brand has enhanced local beer culture and become a pioneer in food pairing.   However, Bohemia’s appeal had aged with its loyal customers, losing a strong point of view along the way. The brand needed to become aspirational once more with a fresh approach that could engage with a younger generation of beer lovers, while staying faithful to its existing consumers.

Elmwood’s extensive immersion into the brand’s background and culture, highlighted a thirst amongst Mexican beer drinkers for a sophisticated and premium national brand to champion. This was a chance for Elmwood to revive Bohemia and create a brand that people of all generations would be proud to support.   Throughout the creative thinking process, maintaining respect for the brand’s past was paramount, together with the need to conserve its authenticity.   Elmwood focused on what makes Bohemia unique – it’s name. Something that is ‘Bohemian’ expresses itself in unexpected, authentic, creative and original ways. From here, Elmwood developed the brand’s new distinct point of view: The Bohemian Angle on Life: Taste with all your senses. Have an opinion, from a uniquely Mexican perspective. Be inspired by tradition, while always looking forward.     In keeping with the new Bohemian point of view, Elmwood used marbled patterns to adorn the iconic gold-foiled tops. The patterns visually describe the sensorial experiences of the beers while also communicating the unexpected and authentic creativity in the brand story.” 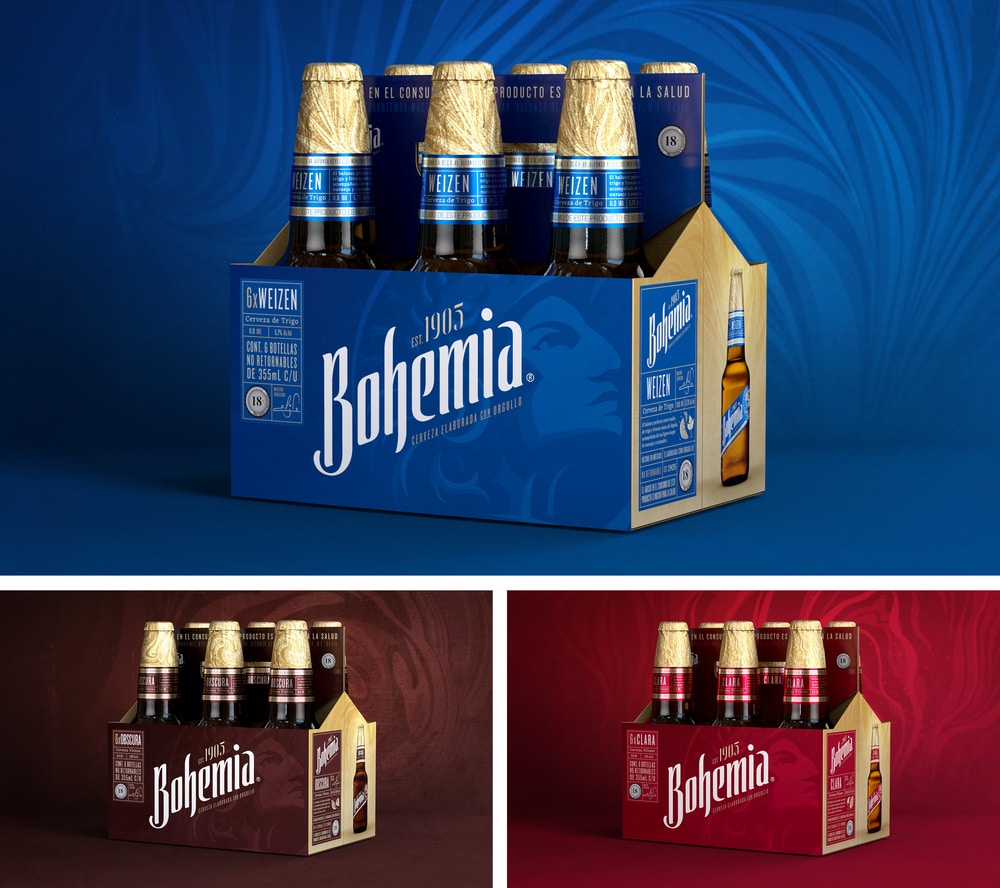 “Oliver Mason, Design Director at Elmwood, says: “Knowing that the audience are engaged beer lovers we wanted to focus on highlighting the premium processes, ingredients and the flavour profiles that make each of the Bohemia beers unique – this comes to life through the foils and the carefully crafted storytelling that makes up the neck labels”   Elmwood collaborated with Mexican lettering artists ‘Lettres’ to redraw the Bohemia word marque. The task was to retain the distinctive character of the ‘Bohemia’ lettering but give it an authentic and contemporary Mexican flavour. The new marque celebrates the balance of perfection and passion that goes into the beer – the perfection is achieved through the consistent rhythmic uprights while the passion comes to life through the playful flicks that break out.   Meanwhile, the Emperor, who has been iconic to the brand since its launch, remained, but with a refreshed look.   Elmwood respectfully recrafted the proud figure in a contemporary style that shares a consistent visual DNA with the redrawn Bohemia word marque. Addressing issues of clarity and simplicity means he is now an impactful and proud icon, not just an illustration. Bravely, Elmwood avoided current trends when thinking about the colour choices and adopted a dark and rich colour palette to convey the depth of flavor in the beers.

Greg Taylor, Global Provocation Director at Elmwood, said: “Bohemia is a truly authentic Mexican brand that has huge opportunity to appeal to the mass market – young and older. We needed to bring Bohemia back and put it in the minds of social, passionate Mexican beer lovers once again.   “Our unique approach encompasses in depth analysis of the market and the product itself. By tapping into authentic issues, looking at local consumer behavior and recognising a national identity we were able to deliver a robust creative strategy for Bohemia.”

Gisselle Villarreal, Brand Manager, Bohemia and Affligem said: “The brief to bring Mexico’s oldest premium beer brand back into the minds of the consumer, with a radical new redesign, wasn’t an easy one. We knew it needed an agency who could really get under the skin of the brand as well as the culture it lives in. Elmwood’s approach, coupled with the team’s exemplary creativity, made them the perfect extension of our brand team. We knew they could deliver what we needed, and they have.   “Elmwood has respected the brand’s heritage and protected it brilliantly while delivering an identity that is fresh, distinctive and powerful. Bohemia will undoubtedly leave its mark once again for many more years to come.” ” 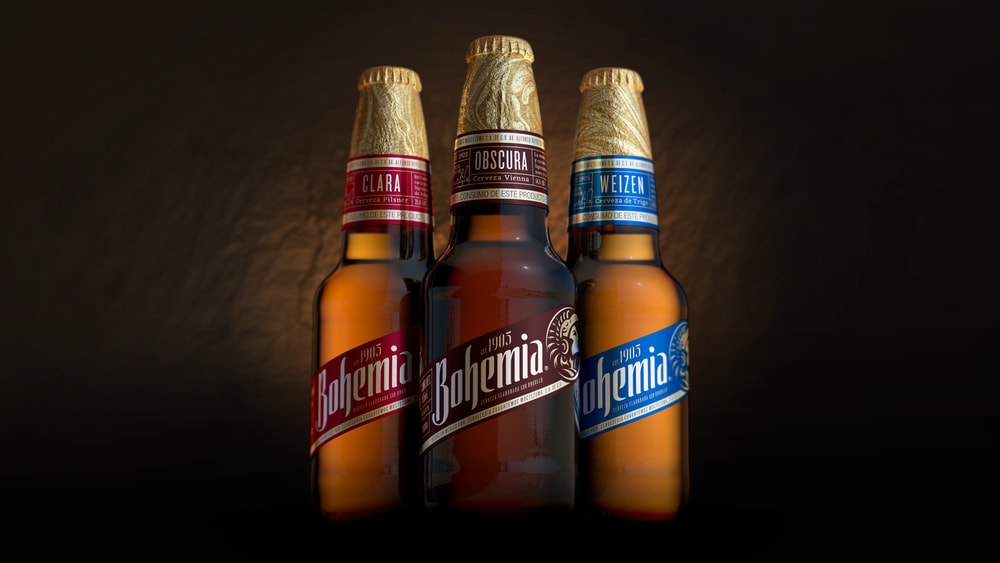