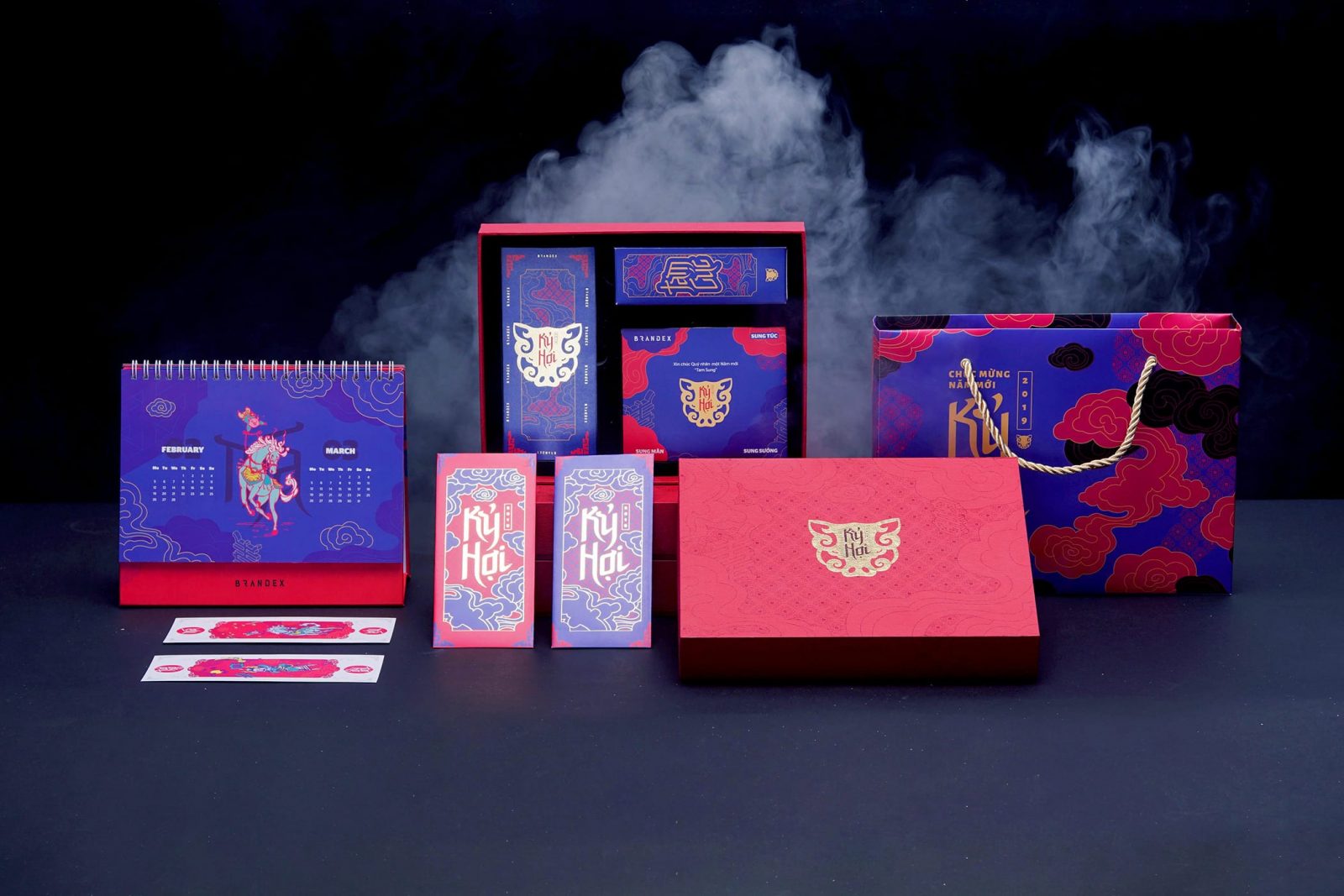 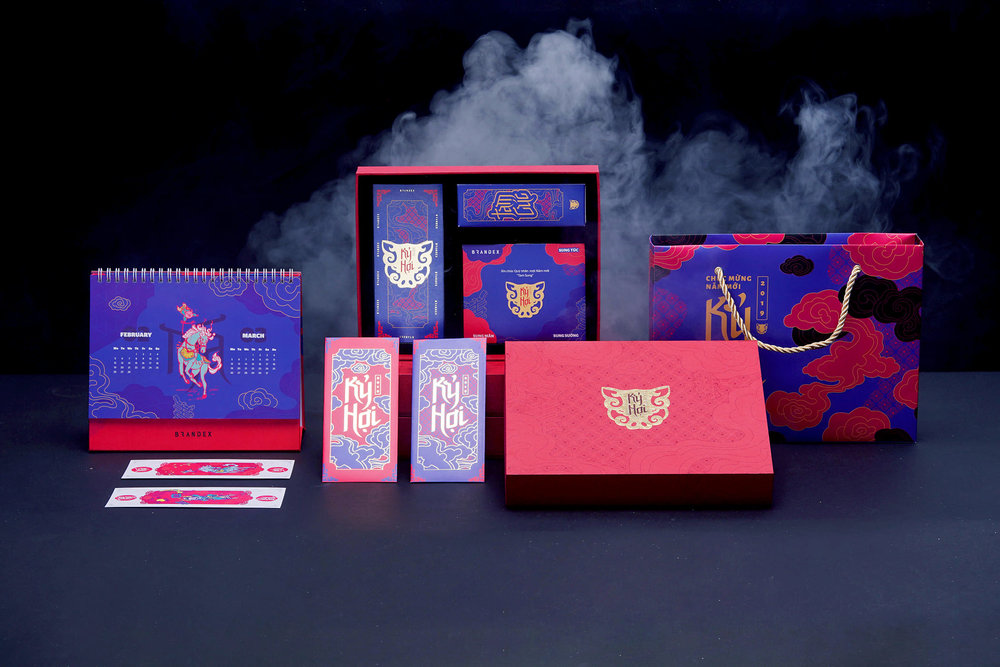 OverallOur Brandex team is eager to create something meaningful and original for a long time. The chance finally came when we all agreed to craft a little surprise to honor ours beloved clients, partners and friends this Tết holiday. 2019 is the year of the Golden Pig and it’s known to be and good year which brings you fortune and wealth. So, why Tam cuc?–Why Tam cuc?After a few sessions of brainstorming, we went with the idea of Tam cuc. Tam cuc isn’t popular among people anymore. Most of the young generation nowadays have no clue what it is. That is why we want to preserve it and call back some good old memory by mixing a traditional card game with a twist of the mordern look. Bringing you the excitement to watch and to play.–About ProductTam cúc (three chrysanthemums) is a multi-trick card game popular in North Vietnam. Tam cúc is not just played for entertainment, but also played in ceremonies and festivals. It is a card game that is commonly played in New Year celebrations, it a habit of northerner to play this game while wait for the banh chung to cook. Tam cúc is mostly played by women because the number of cards is less than in the Tổ tôm, which is more common among men.–Card setA deck of tam cúc has 32 cards with 2 kinds of set red and black. Each set has 1 general (tướng), 2 advisors (sĩ), 2 elephants (tượng), 2 chariots (xe), 2 cannons (pháo), 2 horses (mã), and 5 soldiers (tốt). The black side general is called tướng bà, and red side is called tướng ông. Red side advisors are called sĩ điều. The rest of the cards are addressed by their name and color. –FontInpired by “Thư Pháp”, we created an unique and authentique fypeface, so that the cards could keep the traditional feeling. “Thư Pháp” is an adaptation of Latin alphabet letters written by brush in a calligraphy way, not to be confused with the Chinese’s or Japanese’s Kanji.–Graphic and ColorsAll graphic elements and patterns are based on traditional motives. We also replaced the characters on the cards with cute and funny looking pigs. The colors are reflecting the neon lights on the streets of Hanoi every “30 Tết”.Creative Direction: Nguyễn Công Tùng Concept: Nguyễn Duy Đức Designer: Nguyễn Duy Đức, Nguyễn Công Tùng, Nguyễn Xuân Quang Production: Nguyễn Hùng Cường Illustration: Nguyễn Bích Lan Photographer: Phương Minh Tiến 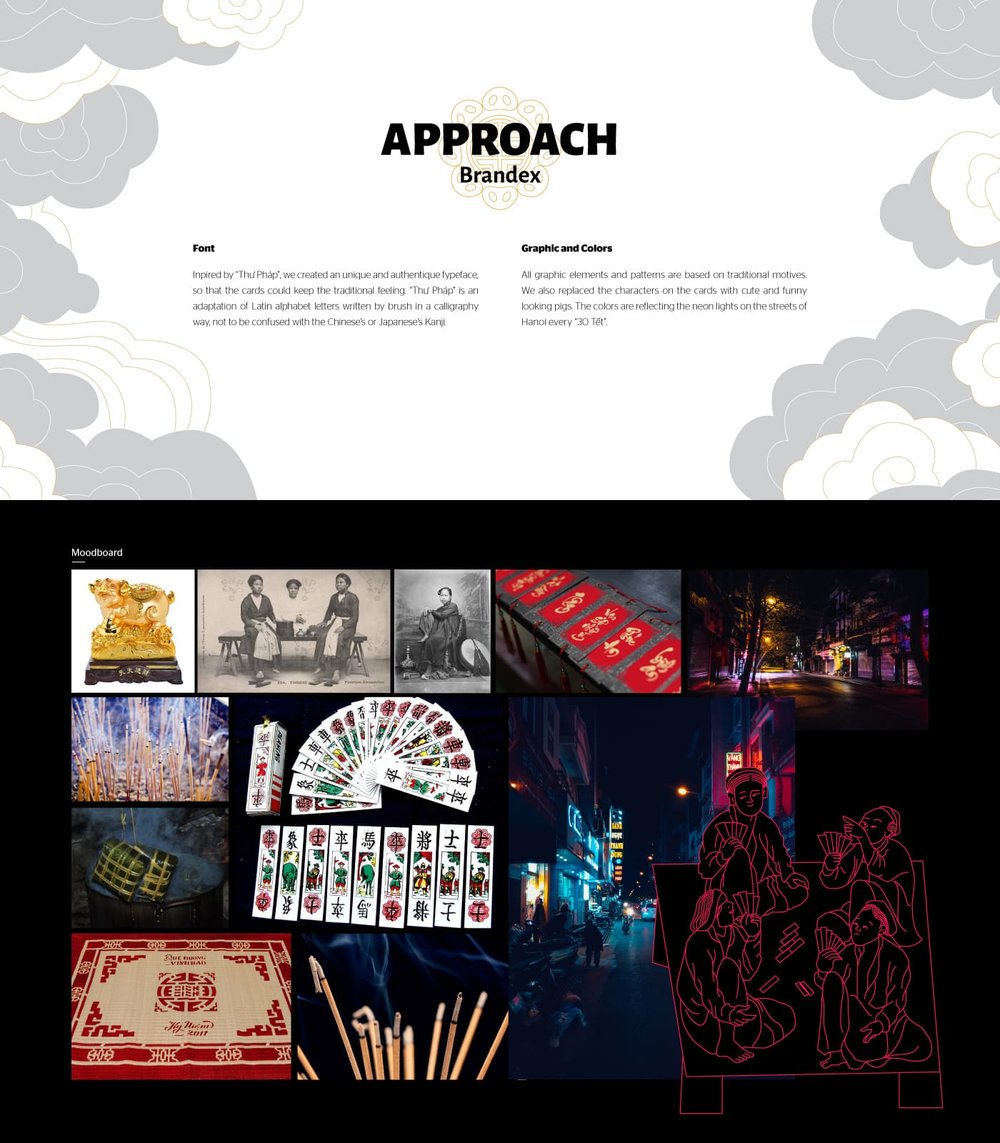 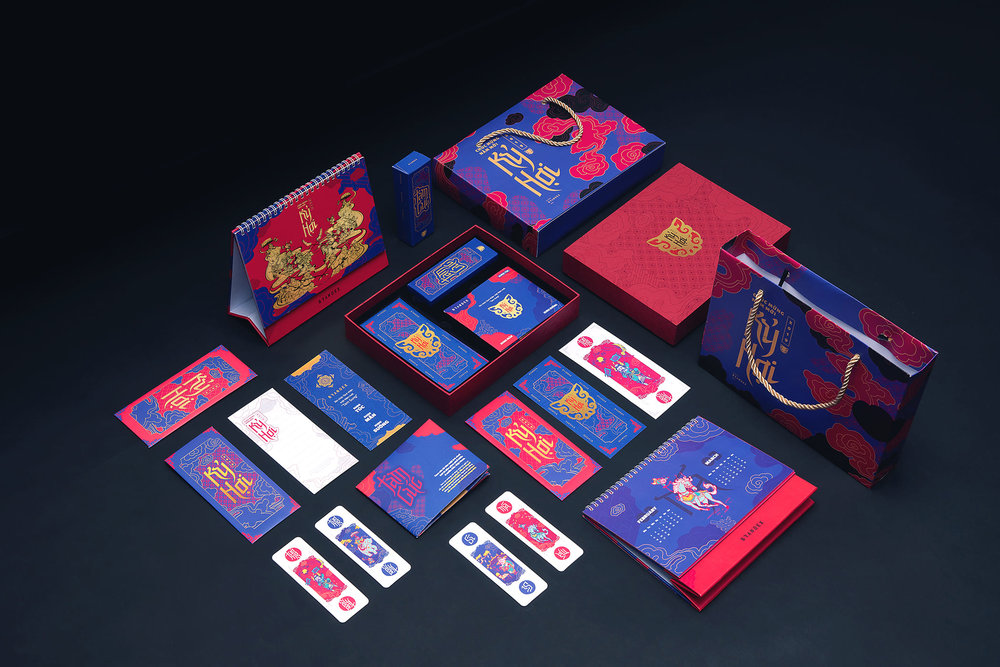 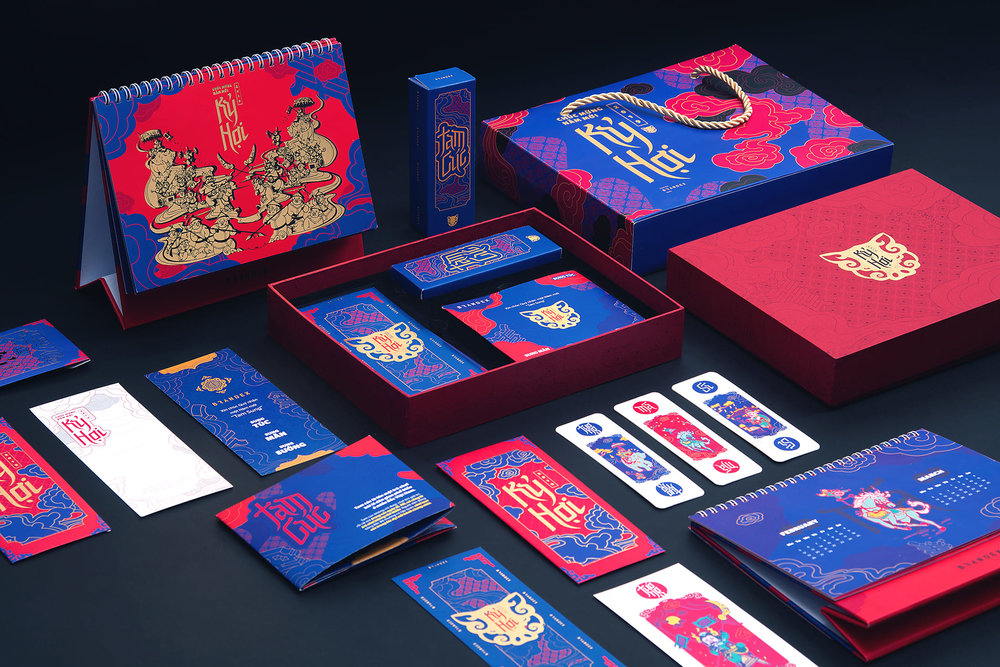 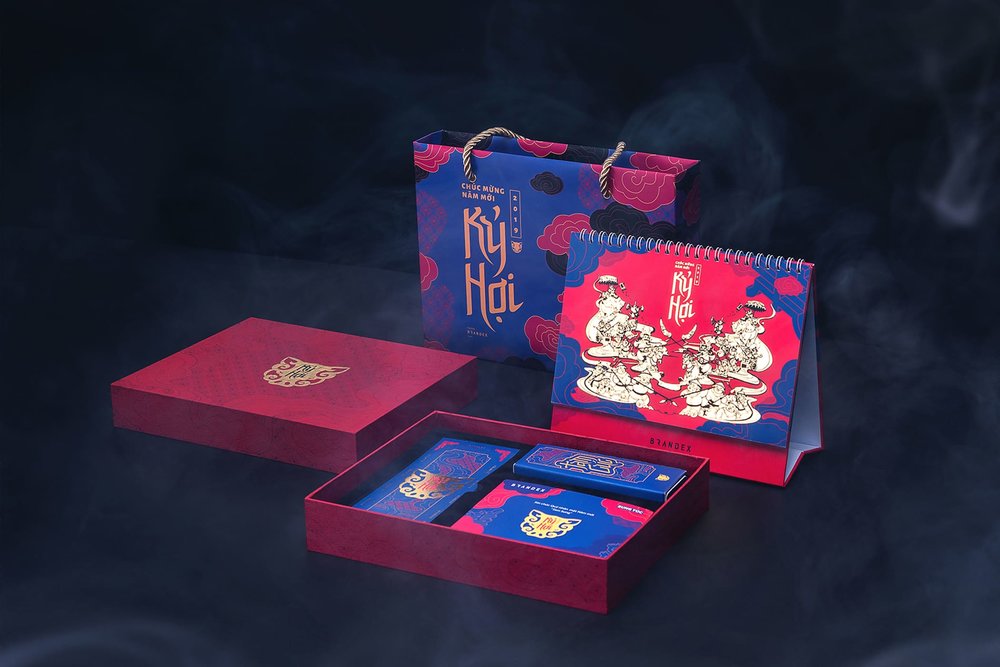 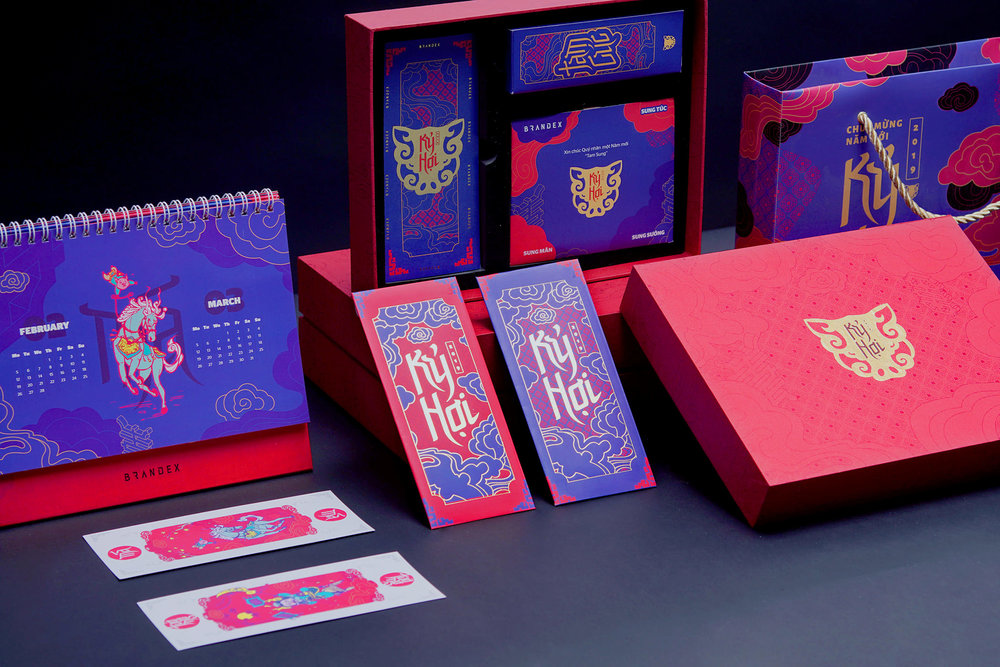 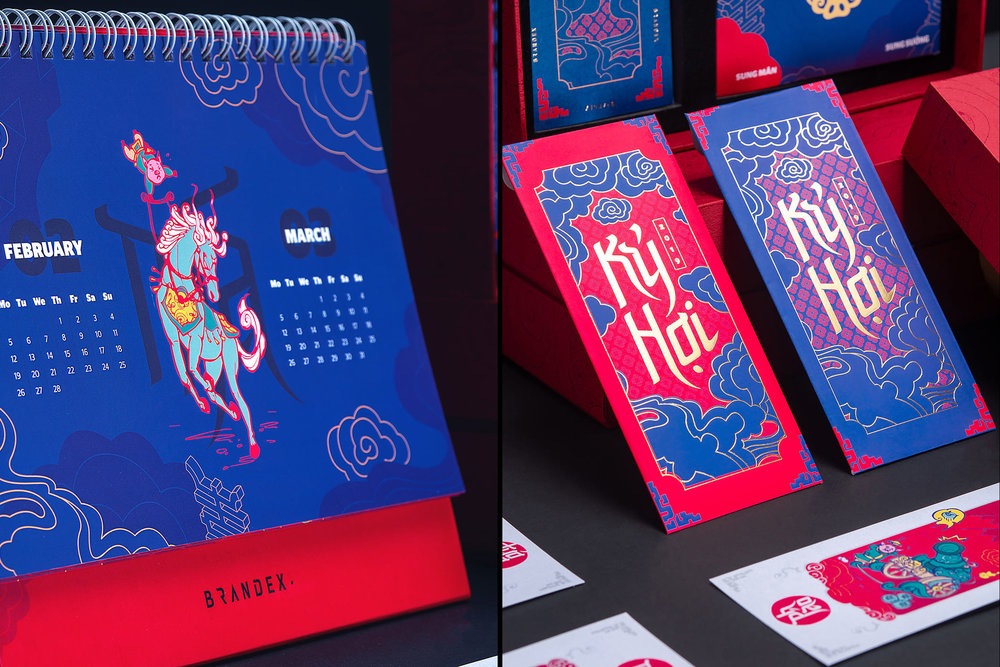 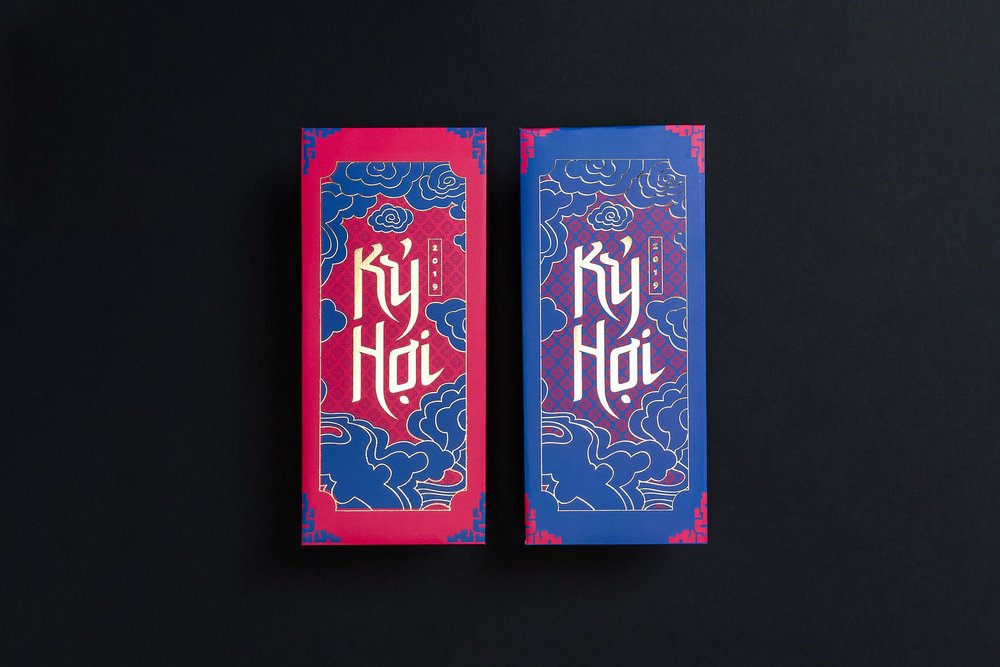 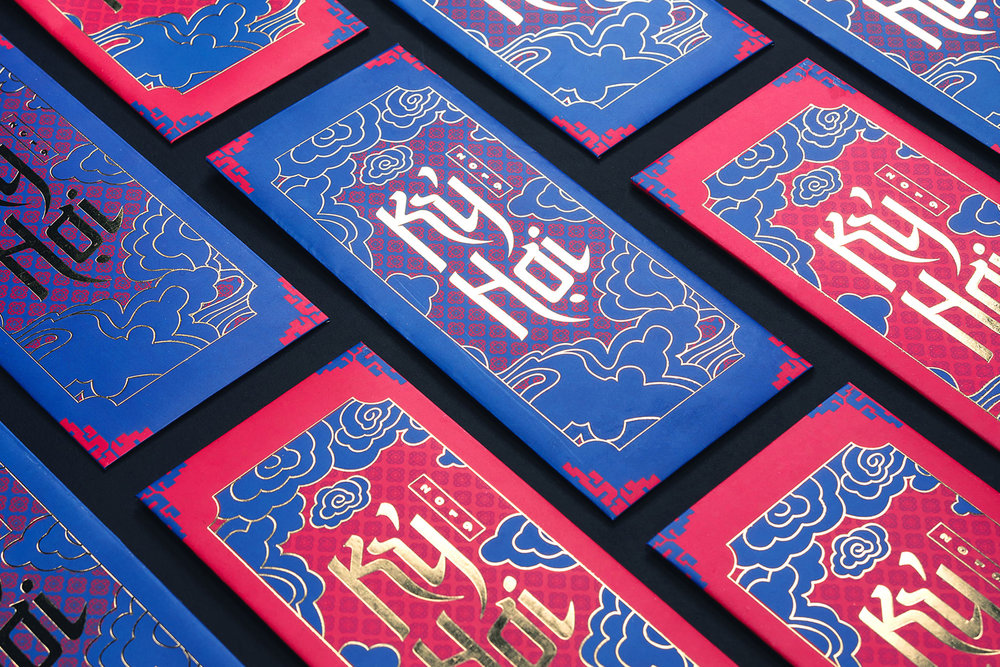 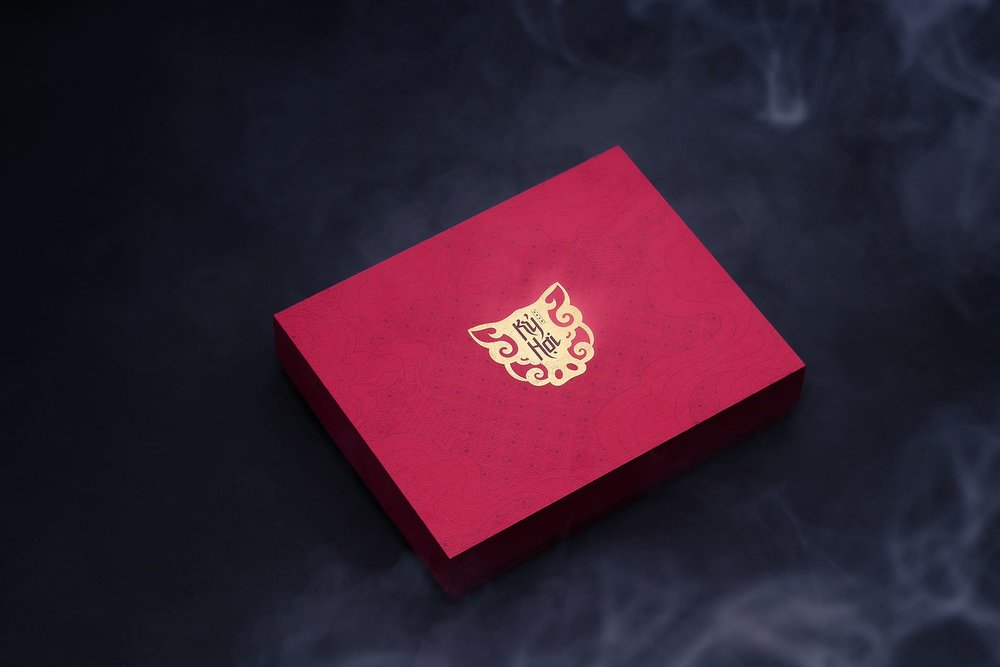 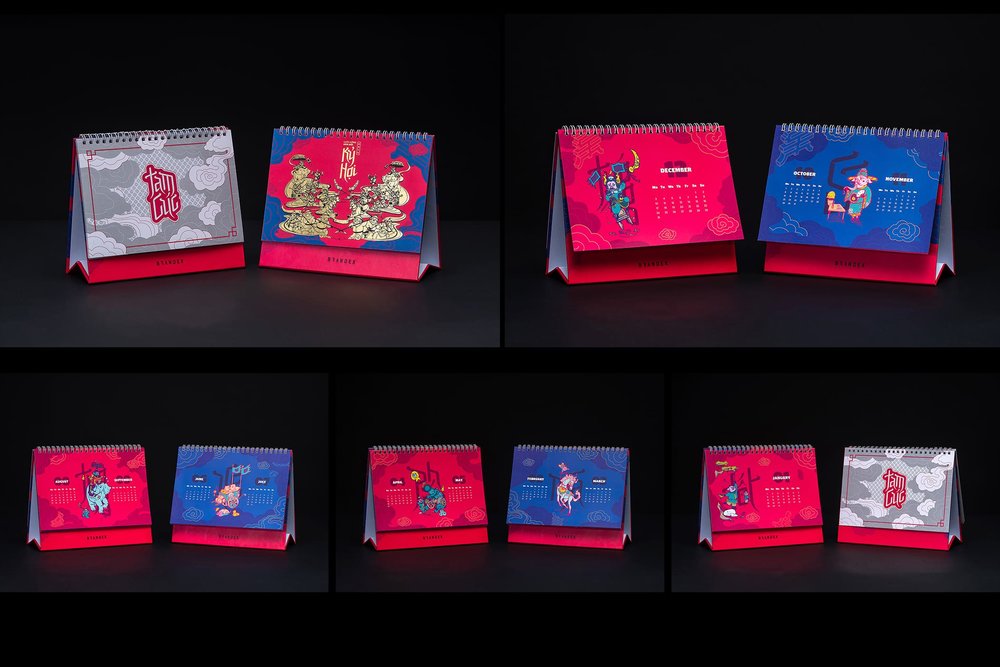 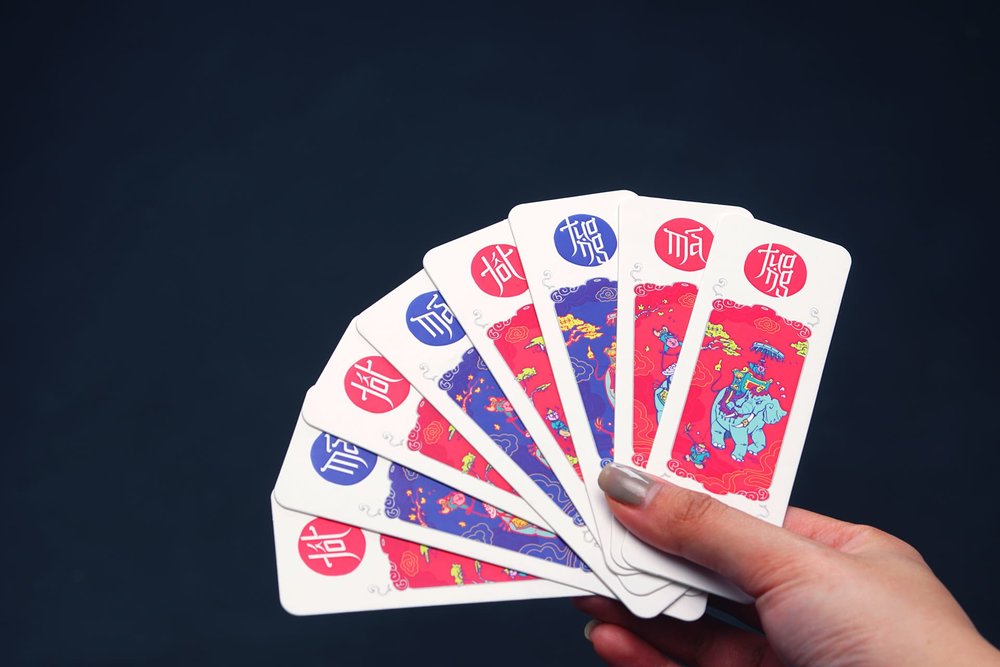 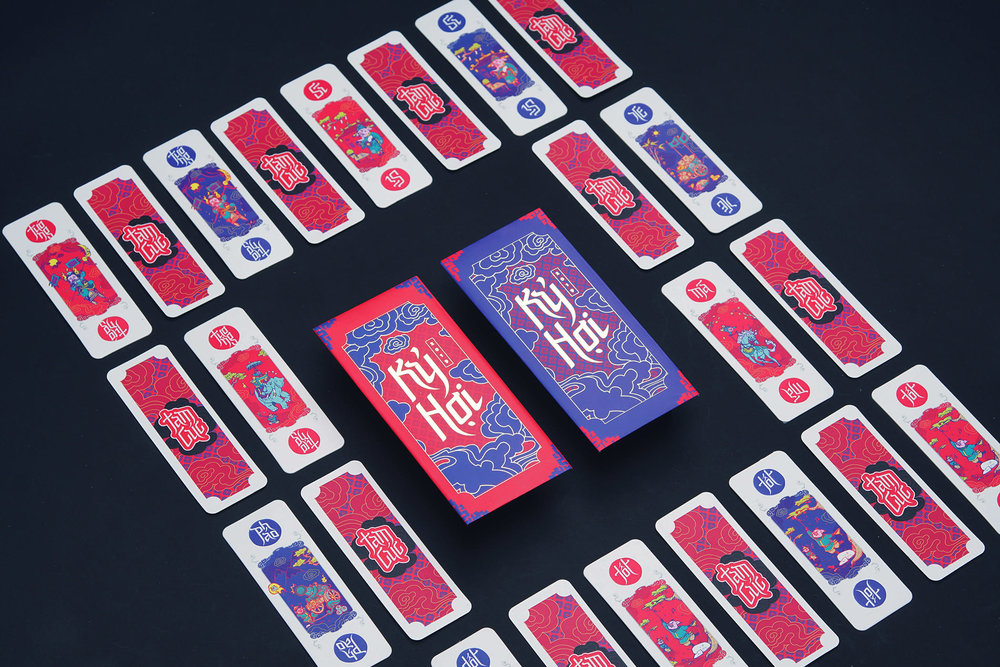 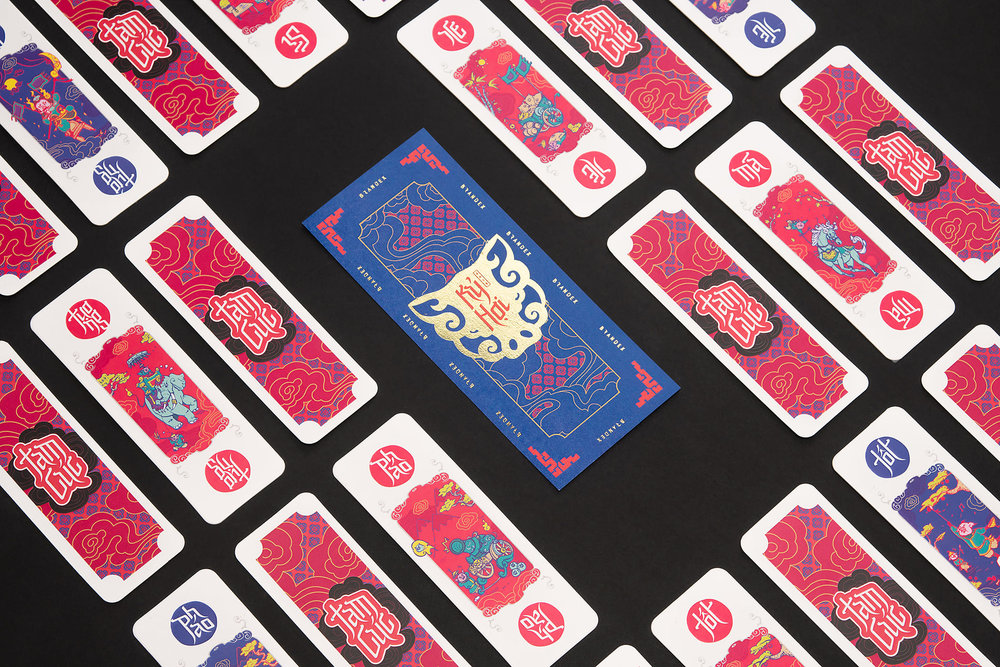 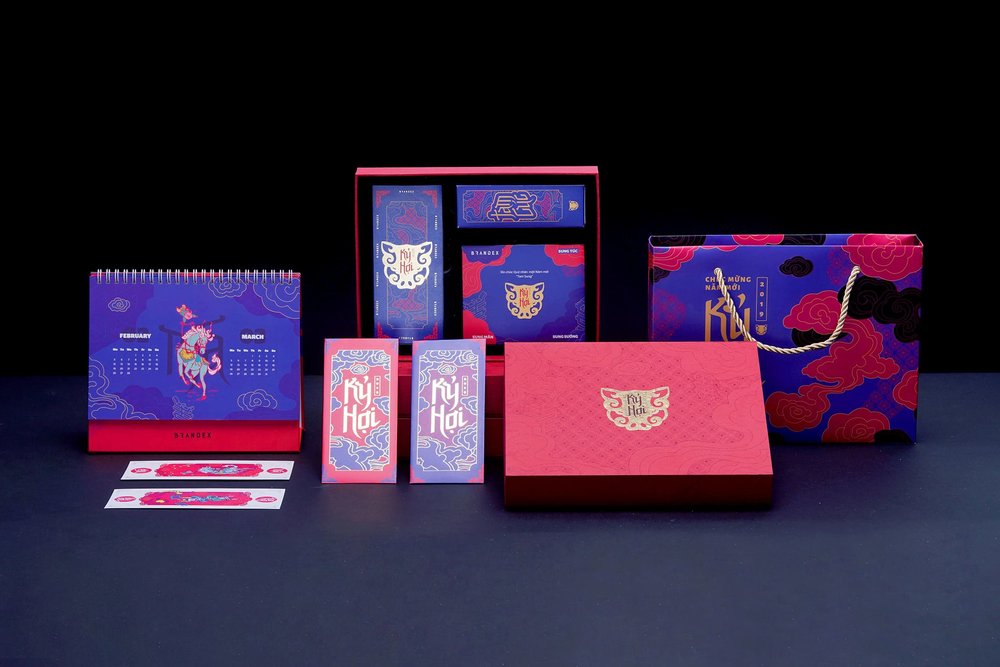 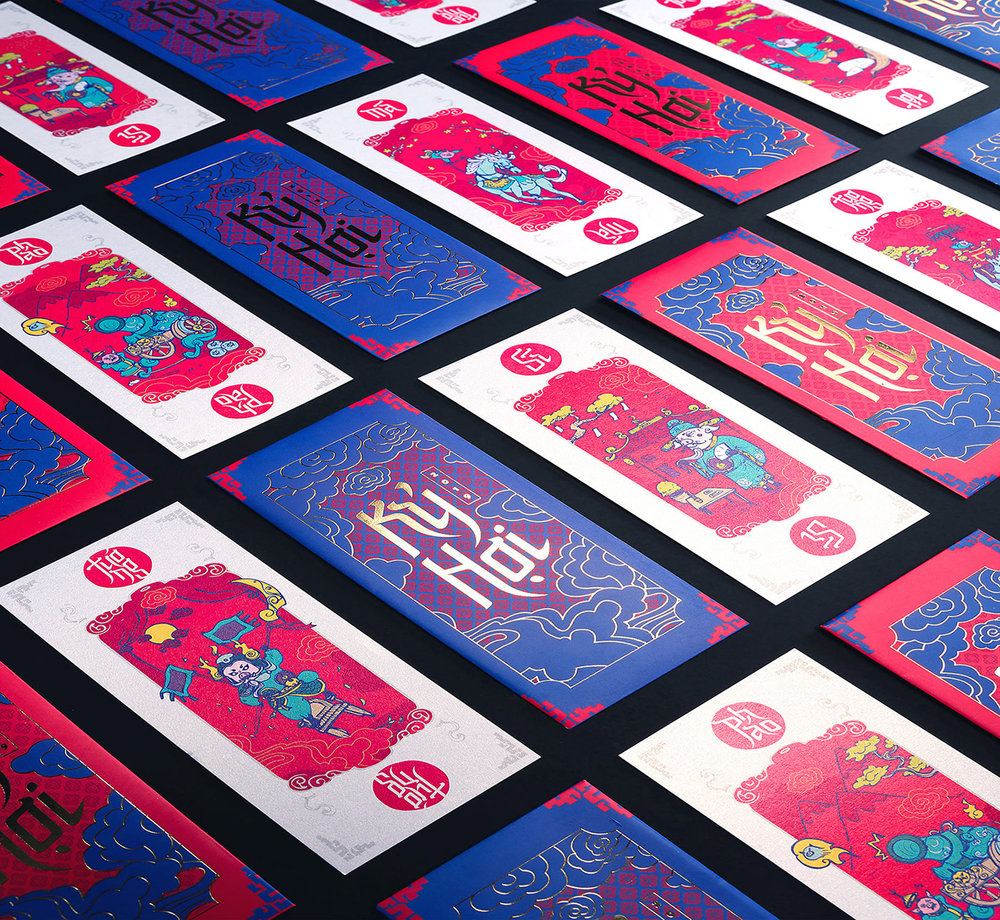