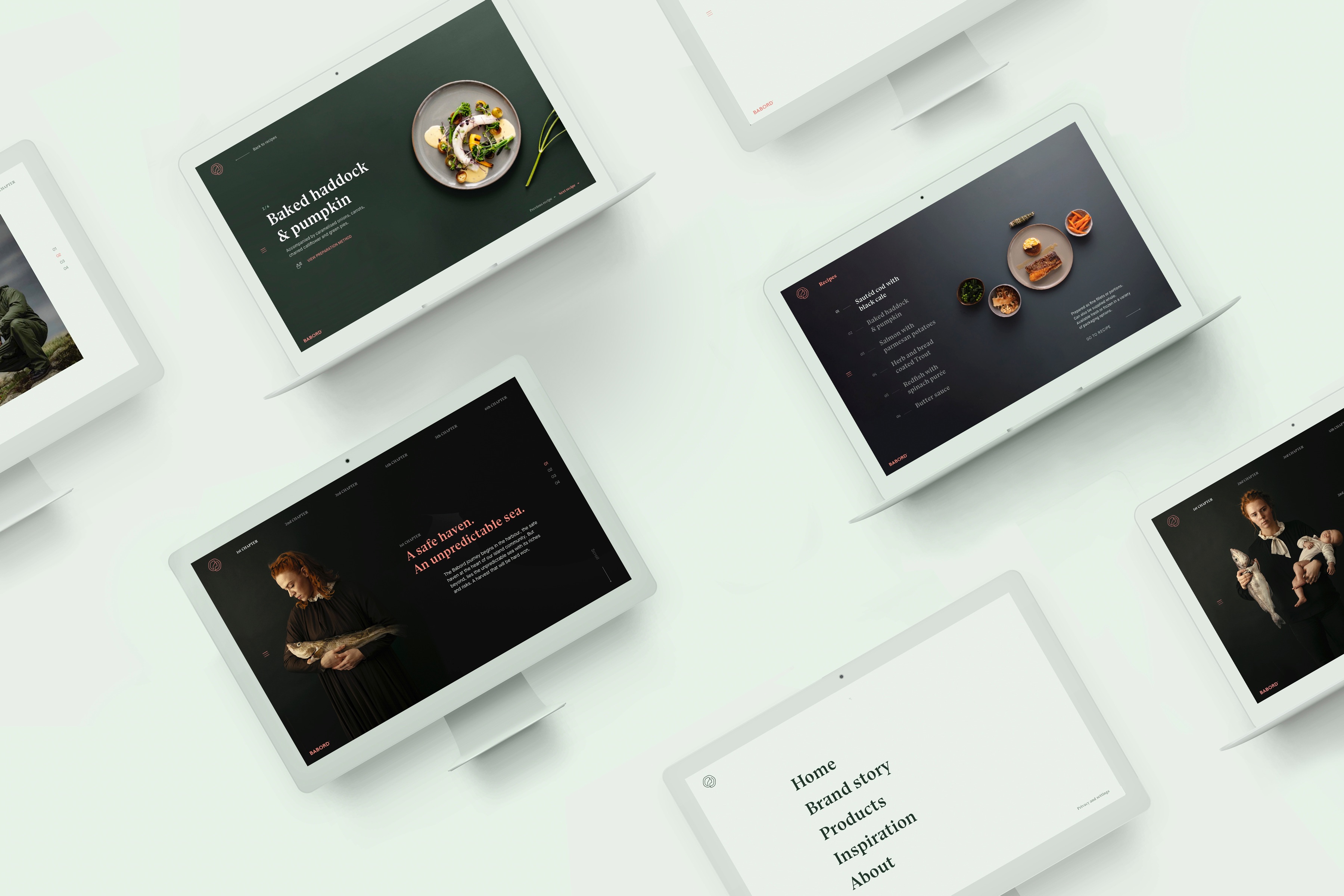 Kind has developed the new brand and communication strategy for the merger between three Norwegian maritime veterans, Torbas, Seaprime Group, and Lyng Group. The merger forms an unwavering rock of a company, gathered under the new brand name, Babord.

A celebrated hero. An unsung bauta.
Light and dark. Fire and water. In nature, as in life, there are many seemingly opposite or contrary forces that turn out to be complementary or interdependent. Balanced partners bound together all of the time.

This concept of yin and yang has been recognized the world over. In traditional Norwegian culture, this duality is captured in the relationship between the celebrated seafaring hero and the unsung loved one who remains at home. The forces that pull these two apart and then bring them together again, the tides of life and love, underpin the Babord way of thinking. Babord celebrates both the heroes of the sea and the unsung Bauta, the one who stays at home at the heart of the community: the hunters and the homemakers.

The name: Babord (The guardian)
Babord comes from the old Norse word bakbor – meaning ‘rear board’ – but which came to mean much more to our seafaring forefathers. On the traditional boats, the steering oar was found on the starboard side of the vessel – while the bakbor – was located behind the helmsman. Thus, the mariner working the rear board – the Babord – was trusted to have the captain’s back, and was essentially the guardian of the vessel.

As guardians of these Norwegian seafaring traditions, the company have taken the name Babord.

The Slogan: Harbour to home
The group’s business is built on trust. Traceability is not an option. It’s a demand. Babord Groups’ sustainable harvesting traditions run way deeper than the cold clear waters they fish. Trust, traceability, tradition – this trinity ensures that Babord always delivers superior seafood, responsibly harvested and carefully processed, from harbour to home.

Babord website is built with a special focus on storytelling. It takes the users on a journey and guides them seamlessly between the chapters in an interactive and interesting way. All transitions are created to achieve smooth flow without notches and stops.

Babord side concept is underpinned throughout the design. Cinematically, this is the direction of return so the main navigation elements are placed on the left side. The fisherman’s wife represents the unsung bauta of the Norwegian fishing tradition. She is the constant. An icon of tradition and trust. Always positioned left, looking out. She is complemented by a wave pattern that gradually becomes wavier.

The site has a dark and clean expression to bring out trust, and strength. Small details with the accents colors (light green and pink) add a touch of warmth, femininity, and exclusivity to the appearance. Images and videos play a major role on the website.
They emphasize the concept and are the mainstay of storytelling.

Trust, traceability, tradition – this trinity ensures that Babord always delivers superior seafood. The website covers all those topics and is one of the tools to convey the brand’s focus both in terms of the planet and the people. It can be easily used in sale processes, informing and triggering emotional value around Babord. 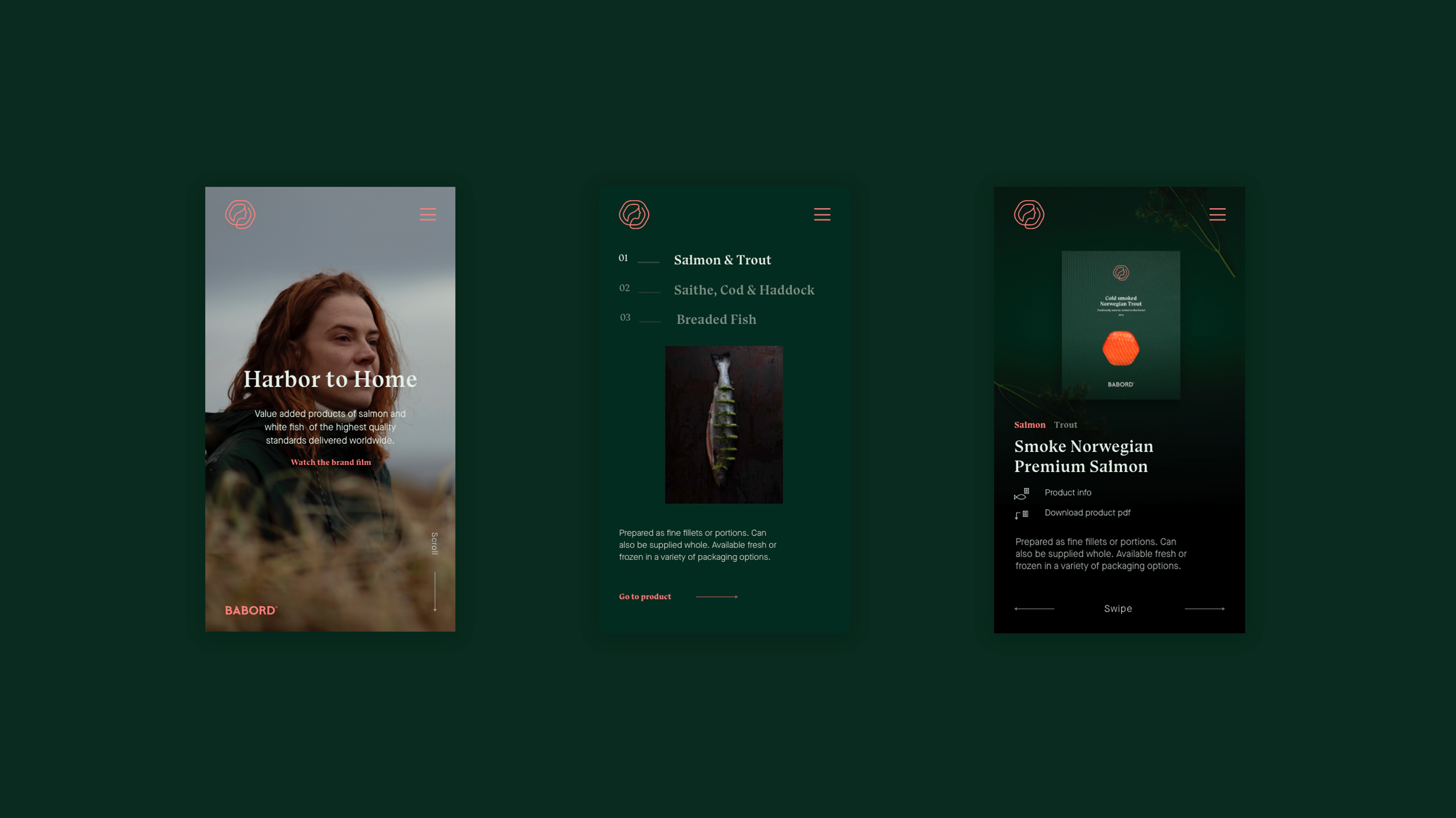 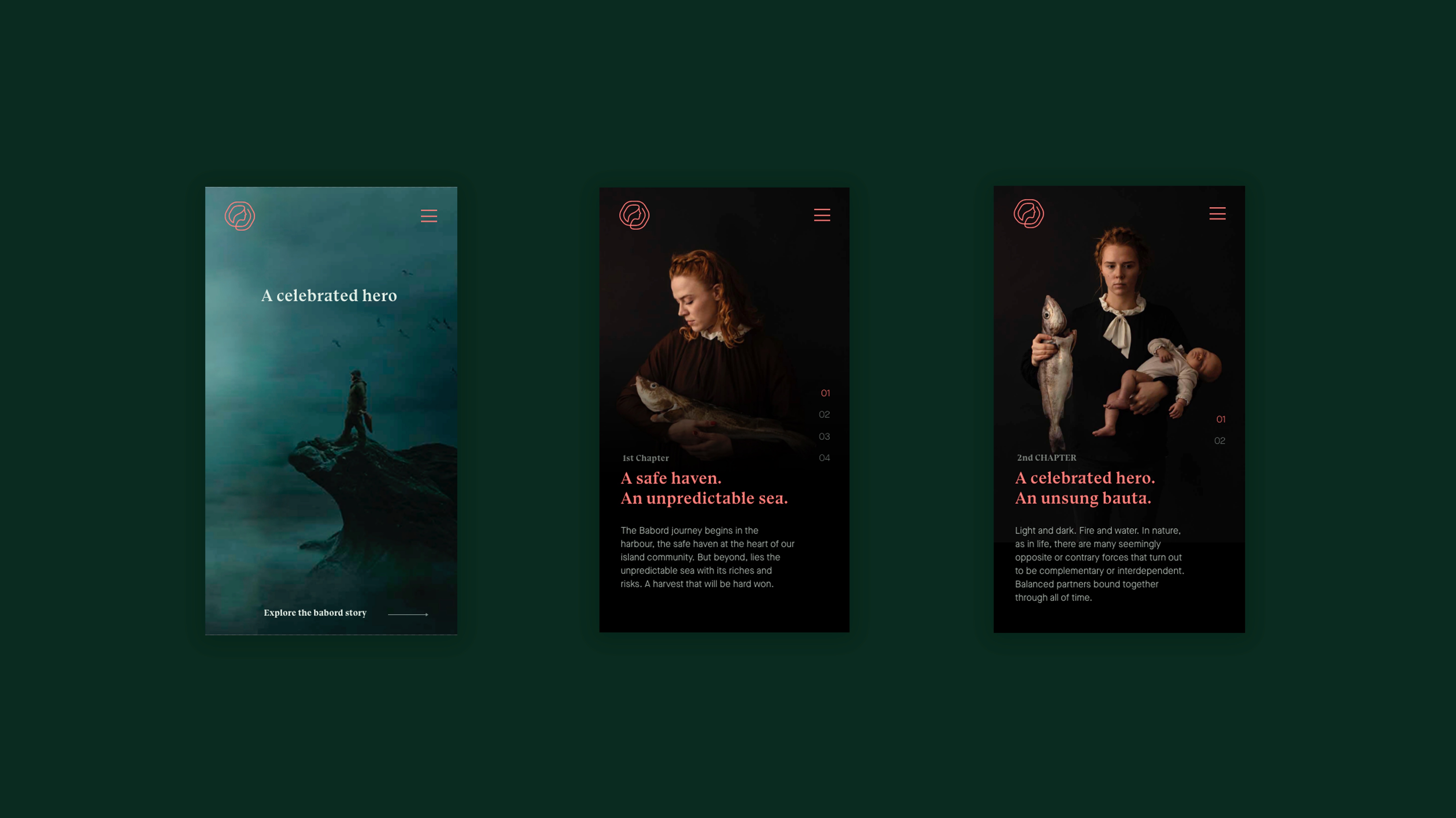 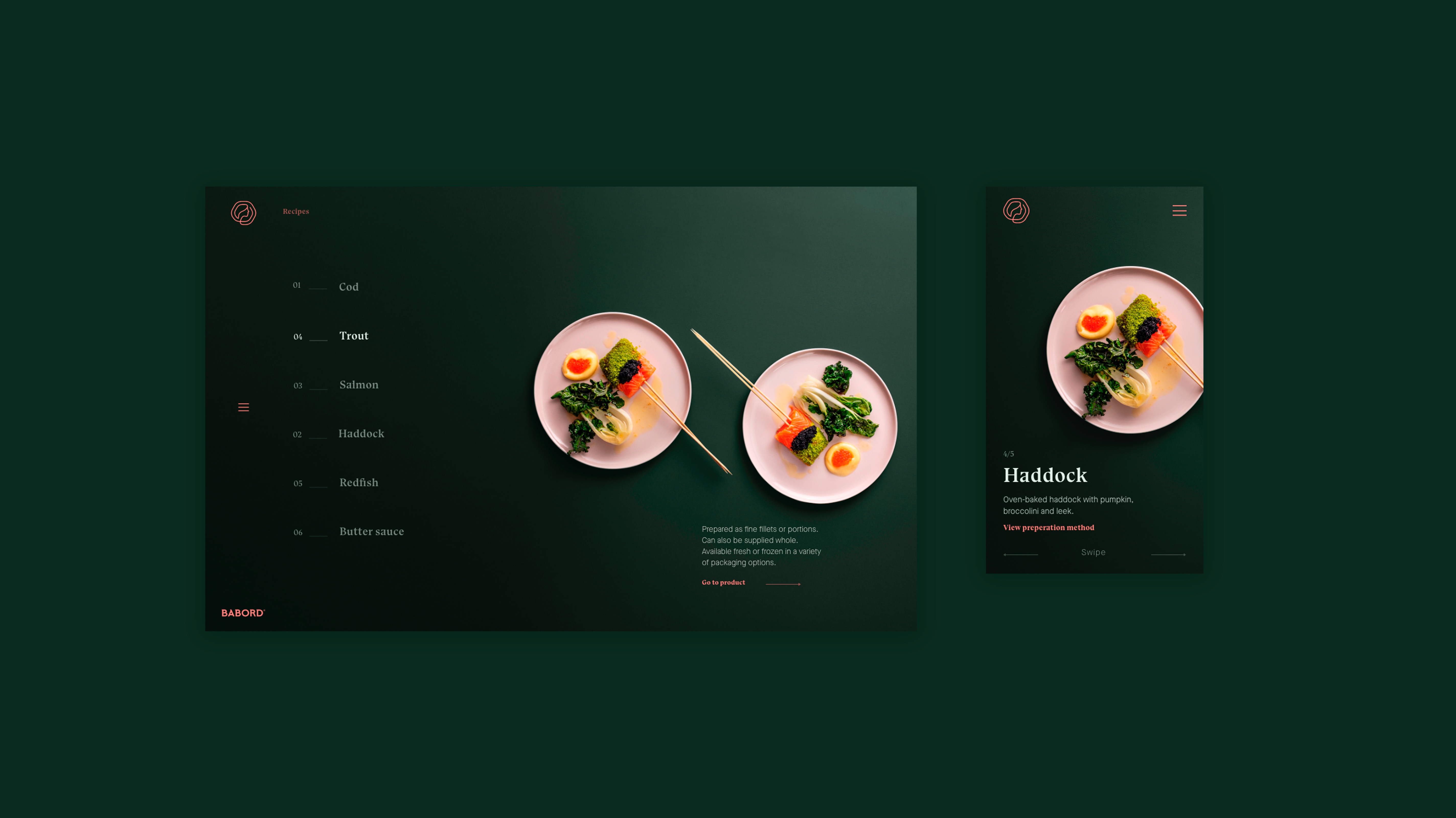 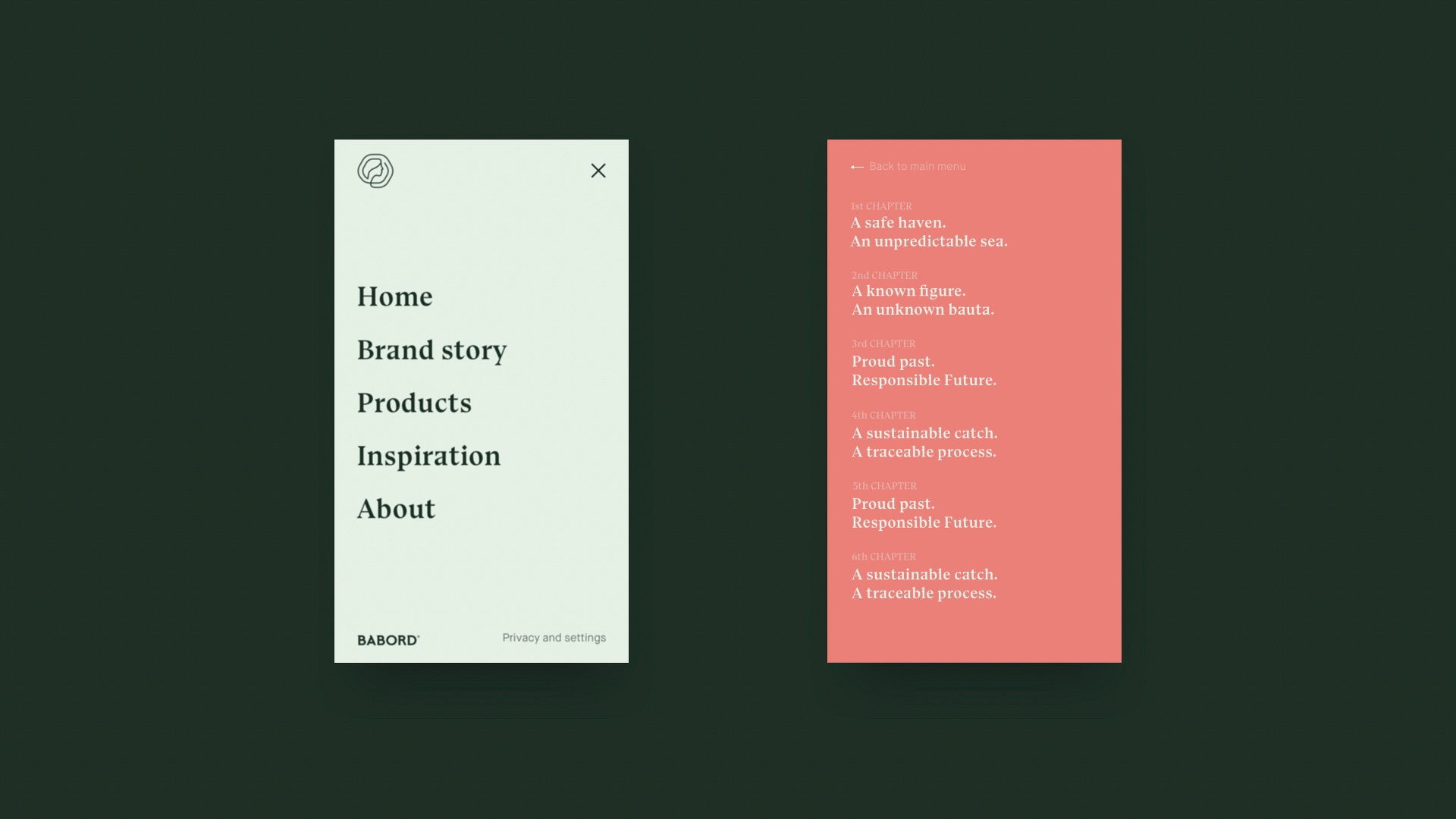 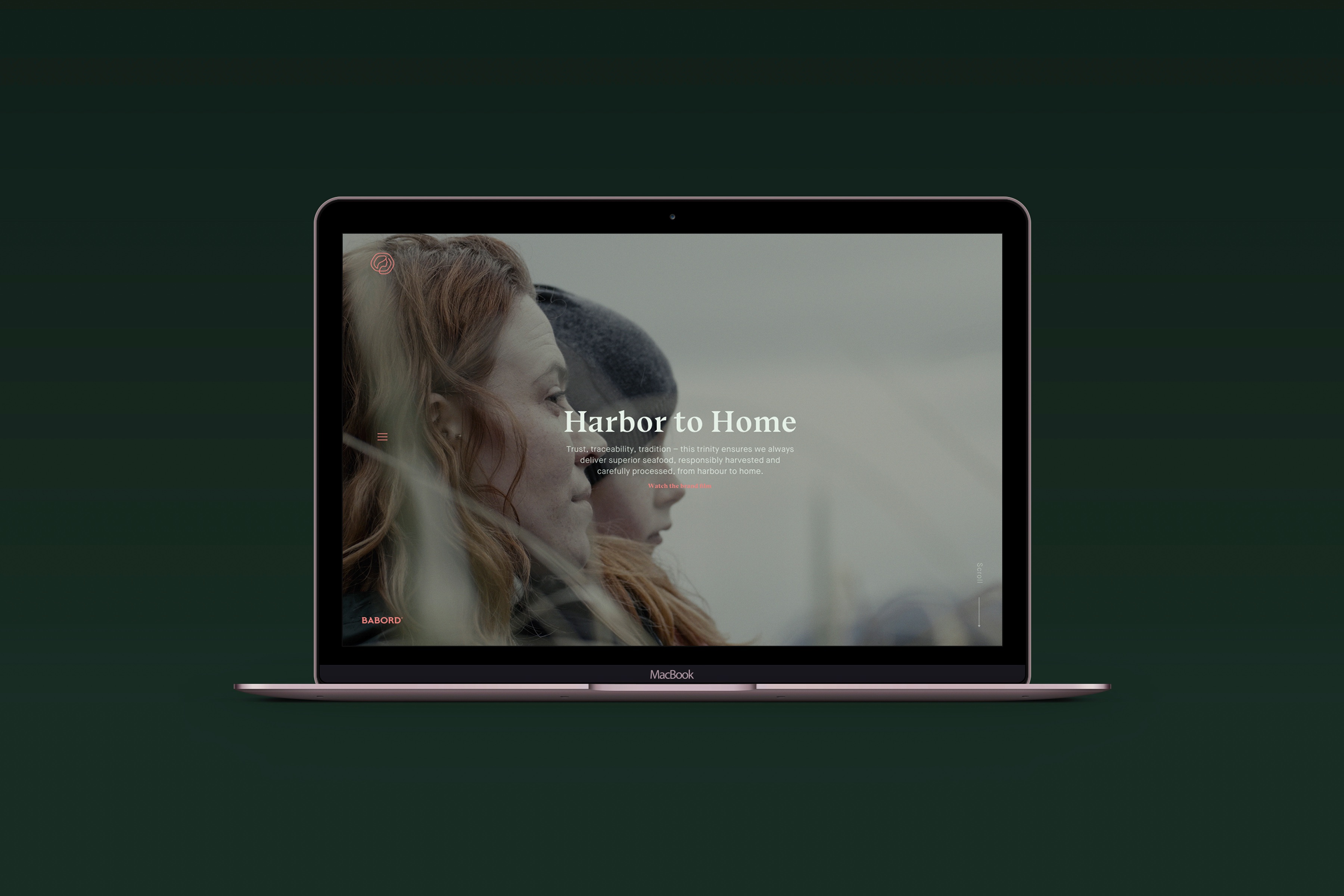 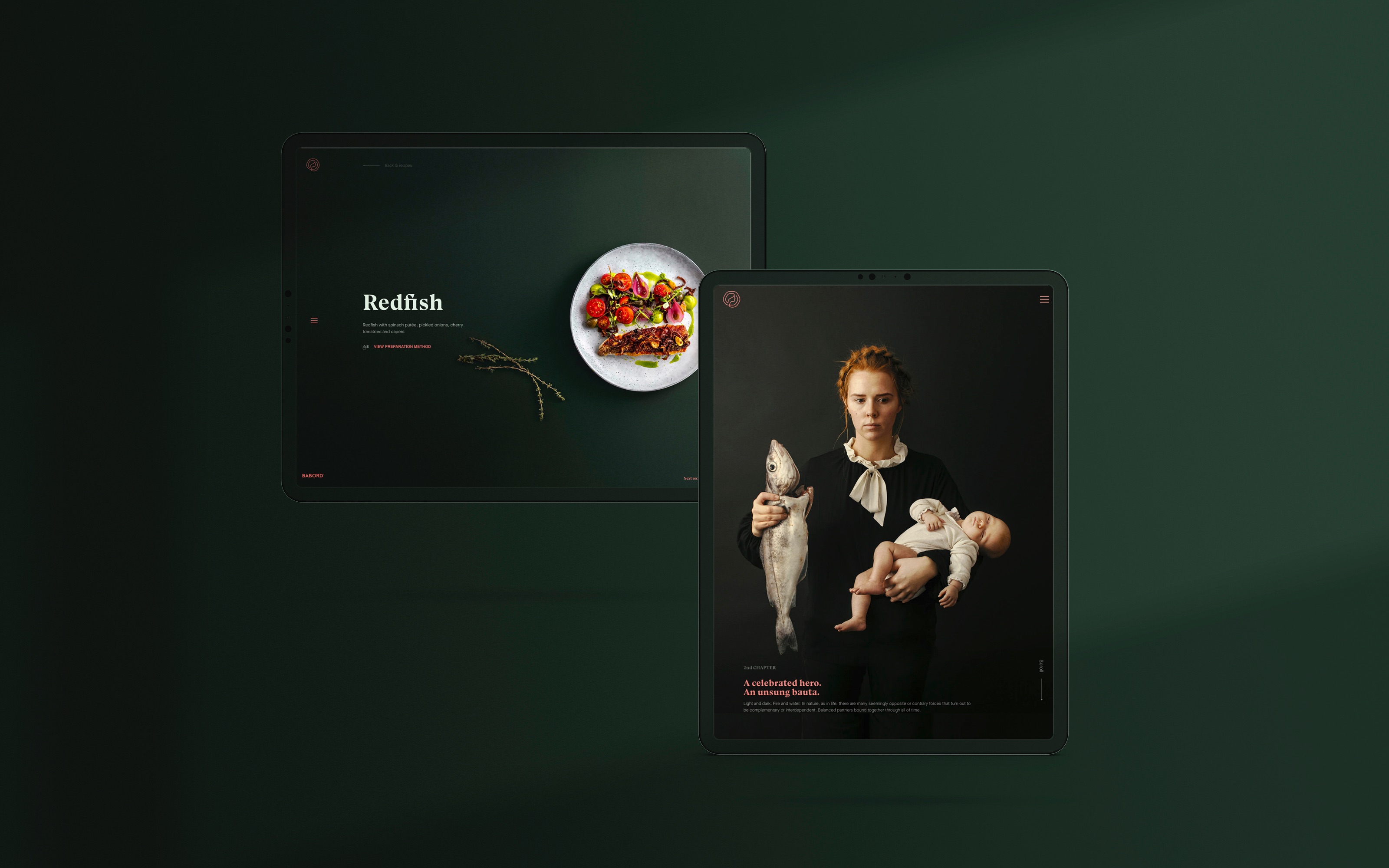