We talked with Asa Cook, Creative Director at Design Bridge and the creative lead behind the new collaborative Cadbury’s ‘Donate With Words,’ fundraising project that aims to give awareness and combat the epidemic of loneliness among the elderly in the UK.

WBDS: Tell us about the fundraising project and how did Design Bridge get involved?

This project didn’t actually start life as a brief. The idea to sell a Cadbury Dairy Milk bar to raise money to help people suffering from loneliness originated in the minds of some very creative people from advertising agency VCCP. I think people can sometimes be a little bit cynical and assume that big brands ask their agencies to create campaigns with a charitable angle, but ultimately have the end goal of selling more products. In these cases the charitable nature can come across as a little hollow, but that certainly was not the case here.

WBDS: Who else was involved in the project and what was the collaborative process between all stakeholders? How did this influence the outcome?

Our client saw the idea in a presentation by the VCCP team and were convinced that it was the right thing to do. As their design partner, they asked us to get involved to help work on the “wordless” bar design. As a team we felt very strongly that it was an issue worth tackling, and we were thrilled to be involved.

From that point on, the way in which we collaborated was left in the hands of us and the other creative agencies involved. I feel like this kind of collaborative effort is becoming a far more common approach now than it was 10 years ago, where it often felt like ad agencies and design agencies were working independently of one another. 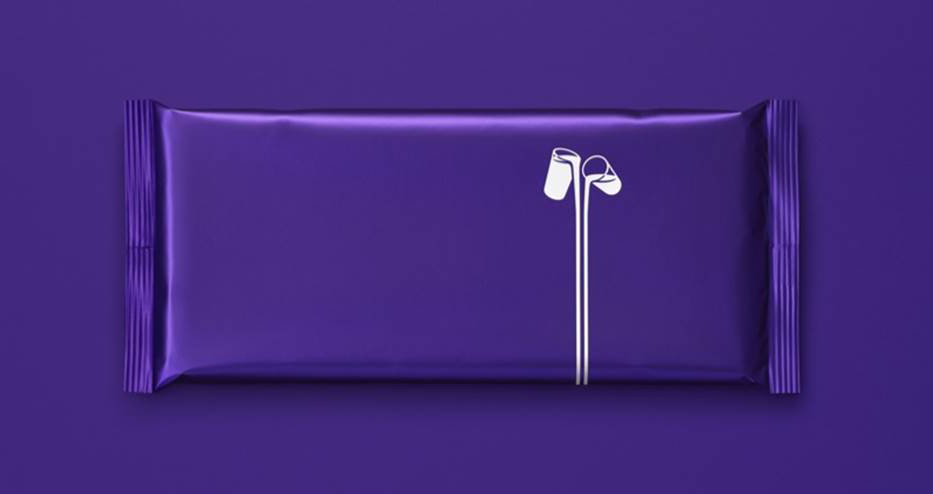 WBDS: What are the benefits, as well as the potential risks, for brand owners when stretching consumer’s brand recognition in this way? How did you navigate around these considerations during the creative process and choosing certain graphic elements?

We decided that we needed a couple of weeks to think about the concept objectively and form our own point of view. We wanted to think specifically about the role and execution of the milk pour and how this would interact with the back of pack to communicate the idea in the best possible way.

We examined the hierarchy of the communication and how new graphic devices could become visual shortcuts to the idea, such as the introduction of speech bubble, the use of the Age UK identity, and the very flat, graphic reinterpretation of the only Dairy Milk equity on pack – the iconic “glass and a half”.

We were particularly interested in how the pack could interact with the tray on shelf, the idea being that the bar itself could remain completely wordless, but people would still understand it immediately when they approached the shelf. We also felt that the 30p donation for every bar sold should be called out as clearly as possible.

When you’re working on something like this you always have in the back of your mind how many people will try to shoot it down, especially if you haven’t communicated the message in the right way. Everyone involved knew how crucial it was to get this absolutely right, and once we had reached an agreement, the hierarchy of communication then influenced every other touchpoint.

From that point onwards we worked together the whole time. Rob, the creative lead from VCCP, and myself were in each other’s studios every day for a least a week, and it felt like the perfect way to work. Bizarrely, during this time we discovered that we went to school less than two miles apart in a very small remote West Yorkshire town – we even attended the same Sixth Form at the same time! There was a genuine sense of our two agencies respecting each other’s skills, helping one another to recognise the most important thoughts and builds, and not taking the suggestion of changes as criticism. Ultimately everybody just wanted the end result to be as good as it possibly could be.

Before presenting to the client team, we met for a full hour to agree on who was going speak at which times and what our combined recommendations were. We agreed, for example, that the glass and half represented a sense of giving and generosity, which poured into the speech bubble on the shelf and the back of pack, and that the graphic should be as flat and stripped down to make the pack feel as ‘quiet’ as possible. We were very keen to show the client team that we were aligned and felt that our combined view as experts in different fields carried more weight. It felt like the Cadbury team really appreciated this approach.

Beyond the design, VCCP created a brilliant film to vividly communicate the idea. For me, this film is an amazingly powerful piece of communication. I think the silent moments are what make it so moving, and this perfectly complements the feeling of quietness that you get from the bar design itself.

WBDS: In the future, how important will it be for brands to have a position and take action on cultural, social and some times politically sensitive issues? From an agency’s perspective, what are the challenges in supporting and helping brands navigate around these issues?

Is running with an idea like this is a risk for the brand? Probably, and there are definitely examples out there where it hasn’t worked. But in this particular case I think that everybody who worked on the project – from the agencies and within the client team – all felt that it was a risk worth taking. You only have to look through the thousands of social media shares and comments to see positive impact it’s had on raising awareness for Age UK’s campaign.

WBDS: On reflection what has been the biggest take-home for the team personally and professionally from a project like this?

There were times when the meetings we had got a little bit emotional. My grandma is widowed and spends so much of her time alone, so it’s an issue that I quickly realised was very close to my heart. Working on this project has really made me think about just how difficult this must be for her, and it has inspired me to find ways help and connect with her more. And it wasn’t just me. Many people I worked alongside on this project have pledged their own time to either volunteer or raise funds for Age UK, which was an extra and unexpected positive outcome.